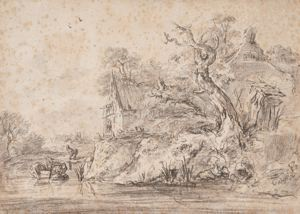 Though heralded by Bernard Houthakker as âthe only known drawingâ by Cornelis Decker in his exhibition catalogue of 19691 and, until recently, catalogued as such in the Museumâs collection, the present drawing has been shown to be the work of the somewhat mysterious eighteenth-century forger Karel la Fargue.2 Karel was the youngest brother of the famous land- and townscape artist Paulus Constantijn la Fargue (1729â1782) and is known today by roughly 250 drawings, of which fewer than eighty were of his own invention. The remaining drawings that are today given to Karel are copies after seventeenth-century paintings, prints, andâless frequentlyâdrawings.3

Increasing eighteenth-century interest in works by artists of the Dutch Golden Age often provided the incentive for artists to copy the works of their forebears. Generally speaking, such activity was not intended to deceive the consumer and, frequently, artists acknowledged that their work was a copy of an earlier work on the sheetâs verso. Cornelis Ploos van Amstel, whose series of 45 Hoofdprenten (Major Prints) after drawings by earlier artists first published in 1765 even went so far as to state that his works would âprevent [a new amateur collector] from taking a copy for an original and being swindled.â4 Such contemporary concerns about counterfeits seem altogether justified in light of Karel la Fargueâs activity. Unlike his contemporary Ploos, who indicated the name of the artist whose work he replicated on the verso of each print, la Fargue never signed his copies and deliberately forged the signatures of earlier artists to pass them off as original works.

The Herman drawing exhibits a number of telltale signs indicating la Fargueâs authorship. It is not only executed in the artistâs favored media of black chalk with the addition of wash but also shows certain deficiencies in the conception of the figures unloading the boat and a tendency toward spiky foreground vegetation. La Fargueâs source for the Herman sheet has been identified as Deckerâs painting in Budapest.5 The present drawing is the only known work by la Fargue imitating Decker.