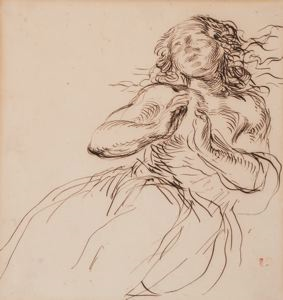 EugÃ¨ne Delacroix was among the most prolific French painters active in the nineteenth century. This drawing exemplifies his ideas concerning suggestive line, for he achieves a maximum modeling of form with minimal use of unified or continuous contours. While the purpose of the drawing is unclear, the fact that Delacroix created over six thousand surviving drawings indicates he was an industrious, inquisitive artist who made drawings without a particular finished work in mind, though some of these drawings eventually served as studies for later themes and subjects.1

Delacroix was a self-declared disciple of Peter Paul Rubens (1577â1640), and this pose suggests his awareness of both Rubens and his protÃ©gÃ© Anthony van Dyck (1599â1641). The young girl with long, flowing hair and dress appears to be leaning backwards suspended in mid-air, a motion implied by her hair, which streams away from her body, and the billowing folds of her dress. The expressive nature of the girlâs hands in front of her breasts suggests a moment of religious rapture. Although this drawing has not been directly traced to a particular Rubens painting, Delacroixâs young girl is depicted in a pose that recalls the ecstatic female figures in a number of Rubensâ works like his many versions of the Assumption of the Virgin.2 The energetic parallel pen lines used to describe the young girl resemble those Delacroix uses in many sketches, distinguishable by feverish, abrupt, and often violent strokes, visibly indenting the paper, alternating as here with patches of fine hatching. Delacroixâs handling of the pen suggests his interest in the drawings of van Dyck, who uses insistent, energized, dynamic parallel pen lines that swell and taper like Delacroixâs.3

While the Herman Collection drawing is not signed, Delacroixâs vehement and feverish stroke is so recognizable that his drawings are distinguishable without signature.4 In any case, this drawing bears the red Delacroix estate stamp that was inked posthumously onto many of Delacroixâs drawings by longtime student and assistant Pierre Andrieu. Although it is not possible to associate the Herman Collection drawing with any particular work by van Dyck, Rubens, or Delacroix himself, the drawing reveals the high esteem in which he held these artists and his own creative fervor.