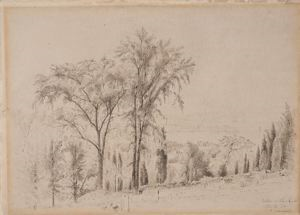 Asher Brown Durandâs drawing depicts a small peninsula jutting off Croton Point near Croton-on-Hudson, a village in Westchester County, New York. Durandâs drawn studies often depict specific locations, rendered during summer trips in the Hudson River Valley and New England.1 Durand made this drawing on September 22nd, 1868, probably during his 1868 sketching trip, which he took from July to September, traveling in the Adirondacks in Keene, New York and at Lake George.2 Katelyn Crawford identified the precise location from Julie Hart Beerâs painting of the same scene dated 1869, just a year later.3

Although no other pen drawings by Durand are published, the signature and inscription are consistent with the artistâs numerous pencil sketches made throughout his career. Durandâs meticulous technique in this drawing no doubt derived from skills he developed as one of Americaâs premier engravers, prior to his becoming a painter in the 1830s, best known as the founder and leader of the Hudson River School.4 By 1868, Durand worked in a developed style and defined set of subjects, drawing expressive trees in pencil, pressing heavily to create dense masses of foliage and using soft, slanted strokes to suggest changes in the leaves.5 The Herman drawing, in contrast, showcases skills Durand acquired as an engraver, using delicate hatching and cross-hatching to render light and shadow and short, abrupt lines to define the foliage.

Drawing occupied an important place in Durandâs creative process, which he described in nine âLetters on Landscape Painting,â published in 1855 in The Crayon. Addressed to young artists, these letters define his method for painting culled from the working methods of Thomas Cole, John Constable, and John Ruskin.6 In his second letter Durand emphasized drawing as the basis of landscape painting, encouraging young artists to âtake pencil and paper, not the palette and brushes, and draw with scrupulous fidelity the outlines or contour of such objects as you shall selectâ¦slovenly and imperfect drawing finds but a miserable compensation in the palpable efforts to disguise and atone for it, by the blandishments of color and effect.â7 The Herman drawing, like Durandâs many pencil studies, shows his allegiance in practice to these principles.