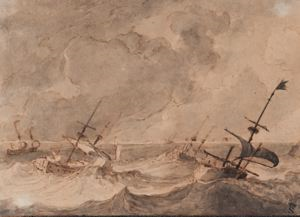 Ludolf Bakhuizen was the most influential marine painter in the Netherlands following elder and younger Willem van de Veldesâ departure for England around 1672.1 Born in Emden, Germany, Bakhuizen moved to Amsterdam by 1649, where he was engaged as an accountant and calligrapher to the affluent banker and merchant Guillelmo Bartolotti van den Heuvel (1602â1658).2 By the next decade, Bakhuizen had begun to make his first marine drawings as well as a number of exquisite paintings in pen and ink, known in Dutch as penschilderij (pen paintings). In 1663 he was named head of the Amsterdam paintersâ guild. With the exception of a brief stay in Hoorn the previous year, Bakhuizen lived and worked in Amsterdam for the entirety of his career.

Storm-Tossed Ships exhibits the characteristics that made works by Bakhuizen prized by contemporary collectors.3 A small fleet of ships struggling through a tempestuous sea provides the viewer with a feeling of imminent danger. As is typical of Bakhuizenâs work, the vessels are on crossing course, and their hulls, masts, and spars provide a crisscrossing counterpoint, further energized by diagonal strokes of light and shadow across the waves. The ships are also depicted in various degrees of peril. The ship in the left background and another in the right middle distance appear to be scudding before the storm under shortened sail, while the vessel in the foreground at left has let fly her spritsail, but is still under control. The ship in the right foreground, however, is in a far more perilous condition. Her tattered flag and broken mast seem to portend her ultimate fate, a suggestion heightened by her sailing into a patch of deep shadow. As inhabitants of one of the worldâs maritime powers, it is no surprise that contemporary Dutch collectors found such images appealing. In them, they very likely saw not only incidents of topical interest, but also an allegory of their own existence, associating the storm-tossed ships with both their own lives and with the fledgling Republic, itself under constant threat from external foes.

While a number of Bakhuizenâs drawings were intended as preparatory works for paintings, it appears likely that this drawing was conceived as a finished work for a collector, resembling in this regard a number of small drawings in the artistâs oeuvre.4 No associated painting survives; it is small in scale; and it is executed with a relatively high degree of finish when compared with many of Bakhuizenâs other drawings. The outlines of the ships and waves have been carefully delineated with pen and brown ink, over which Bakhuizen has placed subtly modulated washes to convey the light effects of the storm. At times, Bakhuizen has brilliantly allowed the paper to produce the strongest highlights. This is especially evident in the passage of water surrounding the ship in the middle ground, perhaps an indication that, despite its seemingly perilous situation, the ship and its crew will ultimately survive the storm.