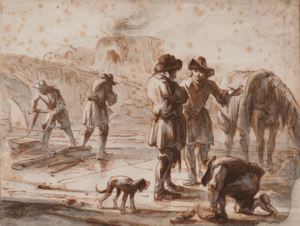 This drawing is an important addition to the graphic work of Nicolaes Berchem. Acquired by Frederick Herman as an anonymous work of the Dutch school, he attributed it to the cityscape painter Gerrit Berckheyde based on its resemblance to a signed drawing entitled Pleasure on the Ice near a City in the Albertina.2 More recently, Katelyn Crawford demonstrated that this work is in fact a preparatory drawing for the central figures in Berchemâs painting entitled View on the Ice by a City, a work signed and dated 1647 (Rijksmuseum, Amsterdam).3

Berchemâs preparatory drawing for the painting is close to the final composition. It has, however, been trimmed along the right margin, resulting in the loss of the horseâs head. Allowing for this alteration, only slight changes have been made from drawing to painting, including the addition of a second dog to the right of the background figures and minimal changes to their poses and arrangement in relation to the limekiln in the background. The prominent inclusion of a limekiln suggests just how strongly the youthful Berchem was influenced by the Bamboccianti, a group of northern painters active in Italy. Such limekilns figured prominently in the works of these artists, beginning with Pieter van Laerâs The Large Limekiln of 1637.4

Stylistically, this drawing is comparable to a number of graphic works by the Bamboccianti, where washâoften of a different colorâwas applied liberally to a pen drawing. The Herman Collection drawing is executed with vigorous linework where form is built by networks of rapid hatching and cross-hatching supplemented by the application of both brown and gray wash to modulate tone. While Berchemâs later drawings became increasingly reliant on the application of subtly modulated wash for his classicizing depictions of the Roman Campagna, his manner of drawing in this work can best be understood through his contemporaneous interest in etching. Berchem produced nearly sixty autograph etchings, most of which were executed between 1644 and 1654.