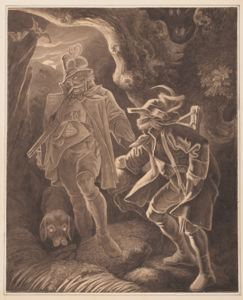 Prior to his career as an artist, which only began belatedly at the age of twenty-six, Ferdinand August Michael Fellner had studied to be a lawyer. In 1825, Fellner traveled to Munich and enrolled in the Academy, where he befriended the newly appointed professor of history painting Julius Schnorr von Carolsfeld around 1827 and subsequently collaborated with the elder artist on designs for frescos depicting scenes from the Nibelungenlied for the KÃ¶nigsbau.1 It is likely that Fellnerâs early association with Schnorr, who was at the time engaged in producing designs for his famous Bibel in Bildern (âPicture Bibleâ), gave rise to Fellnerâs interest in creating book illustrations.

While the present sheet has not yet been connected with any known book illustration, its technique resembles autograph works by Fellner for this purpose. The broad handling of wash and masterful use of the reserved paper to generate the drawingâs highlights can also be seen in Fellnerâs preparatory drawings for Wilhelm Hauffâs historical romance Lichtenstein: Romantische Sage aus der wÃ¼rttembergischen Geschichte (âLichtenstein: Romantic Saga from the History of WÃ¼rttembergâ), first published in 1826.2 Even closer are Fellnerâs drawings for Hauffâs Mann im Mond (âThe Man in the Moonâ) of the previous year.3 As with the Herman drawing, Fellner has defined the outlines of his figures not through shadow but through a thin highlight, which makes his figures appear as if they glow from within.

The subject matter of the Herman drawing also suggests that it may well have been intended as a book illustration. It depicts the ghost of Matthias Klostermayer appearing to a fellow hunterâand presumably from his muffled face also a poacherâin the woods. Klostermayer was an eighteenth-century German Robin Hood affectionately known to his contemporaries as the Bavarian HieselâHiesel being slang for Matthias. Klostermayerâs exploits eventually earned him larger-than-life status, his admiring countrymen attributing to him such feats of strength as swimming across the flooded and freezing Lech Rive, taming a wild mastiffâwhich can be seen at lower left in Fellnerâs imageâand catching bullets with his bare hands. Eventually, Klostermayerâs luck ran out and he was caught, convicted, and executed by the Bavarian authorities in 1771.4 However, his adventures were not soon forgotten and provided material for popular folk songs, poetry, and plays, the most famous of which was the figure of Karl Moor in Friedrich Schillerâs Die RÃ¤uber (âThe Robbersâ) of 1781.

1Nanette Sexton, in German Master Drawings of the Nineteenth Century, Cambridge, MA: Busch-Reisinger Museum, 1972, no. 17.
2Several illustrations for this text are in the collection of the Kupferstichkabinett, Dresden (inv. C 1910â1994 and C 1910â1995).
3One particularly close example from this series is in the Staatsbibliothek zu Berlin, Preussischer Kulturbesitz.
4Ludwig Tieck, Mathias Klostermayr oder der Bayersche Hiesel, 1791; reprint Frankfurt am Main, 2005.