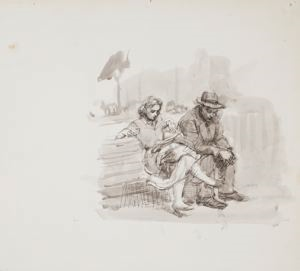 Goedde Class
The art critic Henry McBride once remarked that âthe young men and women in [Bishopâs] drawings belong to the great middle class, the class that takes the 8 a.m. subway to work, that gulps hot dogs at street corners, goes to lesser movies, and does little discreet lovemaking on the benches in the park. They may have some occasional troubles but Miss Bishop doesnât specialize in those.â Public politeness, rather than private despair, is indeed the focus of Bishopâs paintings. With the advent of the modern concept of the âdateâ in the 1930s and â40s, rituals of courtship began to take place in public spaces such as parks, theaters and dance halls. Bishop quietly documented this and other unspoken rules of engagement between the sexes. -- Figure Study: The Fourteenth Street School and the Woman in Public | August 26, 2011 - December 23, 2011

Isabel Bishop was an American painter and graphic artist, best known for her depictions of working women in Union Square in the 1930s. She was just sixteen years old when she moved from Detroit to New York in 1918 to study illustration at the New York School of Applied Design. From there, she later transferred to the Art Students League, where she studied under Kenneth Hayes Miller, who made a lasting impact on Bishop, both personally and artistically.1 In 1926, she and Miller enrolled in a mural painting course that emphasized the formal principles derived from the Renaissance that she would later incorporate into works like Couple on a Park Bench #16.2

Bishop made this drawing between 1945 and 1947, a time when she was adjusting to the birth of her son.3 Her subject matter, consistent throughout the 1940s and â50s, comprised nudes, laborers, people in motion, and, as in the case of the Herman drawing, couples. Stylistically, her work became more painterly in the 1940s, and she typically painted a scene in wash before drawing in pen, resulting in a complex end-product. The pen and wash work together to construct the image, rather than simply using the pen to outline and the wash to shade. In the Herman drawing, a sense of experimentation is evoked by the rendering of the womanâs left hand, which Bishop had clearly drawn in wash and then reworked significantly in pen.

The Herman collection drawing features a couple seated on a bench, a familiar scene in much of Bishopâs work. Knowledgeable in Renaissance techniques, Bishop uses the systematic oppositions of form and pose (contrapposti in Italian) in depicting her couple. The woman leans back on her elbows with arms spread, bathed in light; the man hunches forward in shadow with his hands together. Their legs likewise contrastâhers crossed, his spread with feet flat on the ground. The contrasting poses lend a sense of conflicting emotions. Although the man and woman sit together, their thoughts seem to be far apart.