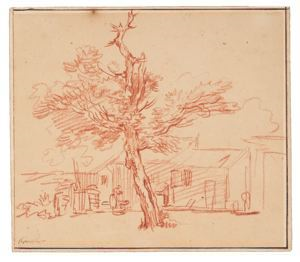 The renowned French rococo painter FranÃ§ois Boucher enjoyed an immensely successful artistic career: he won the <i>Prix de Rome</i> in 1723 at only nineteen years old, was patronized by the famous Madame de Pompadour, and was admitted into the Royal Academy as a history painter, one of the highest achievements an artist could obtain.<sup>1</sup> He was known for his bucolic landscapes, closely associated with the whimsical nature of the rococo, but in <i>Farmyard Scene</i>, one sees a different side of his approach to the natural world. Here Boucherâs treatment of landscape is partly inspired by his trips to the Low Countries, and partly by the work of several seventeenth-century Flemish and Dutch painters, including Rubens.<sup>2</sup> Boucherâs studies from nature were sometimes incorporated into the backgrounds of his paintings, as he was known for finely detailed landscapes. While no single tree in his finished work exactly matches this drawing, a number of paintings contain similar trees with the riven trunk and blasted limbs of this tree, including, for example, <i>Forest Scene with Two Roman Soldiers</i> of 1740 (MusÃ©e du Louvre), and <i>FrÃ¨re Luce</i> of 1742 (Moscow, Pushkin Museum).<sup>3</sup> Although it is called <i>Farmyard Scene</i>, a more appropriate title might be <i>Tree Study</i>, since most of Boucherâs attention is focused on the tree, half-dead, picturesque, and full of character and not at all dependent on ideal models.<sup>4</sup>

In this <i>Farmyard Scene</i>, Boucher employed a mixture of quick strokes and more deliberate, deeply impressed outlines. Careful detail has been applied to the trunk, branches, and base of the tree, whereas the rest of the farmyard is denoted with light hatching and outlines. Boucherâs technique here resembles rough red chalk figure sketches like the Seated Lady in the Metropolitan Museum, New York, and a <i>Lady Seated</i>, Holding a Fan in a private collection.<sup>5</sup>

Such authorities as A. Hyatt Mayor and Agnes Mongan have accepted this drawing;<sup>6</sup> and Pierre Rosenberg observed that it is recognized as an early signed work by the artist.<sup>7</sup>