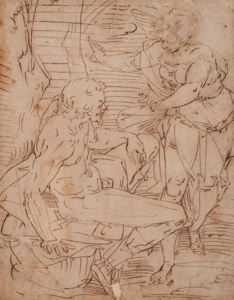 This enigmatic drawing by Cambiaso presents an iconographic challenge. The composition consists of a muscular older man arising from a recumbent position, apparently in an attitude of surprise at the approach of a female figure making grand gestures that suggest a greeting or a warning. No other details of costume or setting are provided, and this has resulted in a variety of proposals as to its subject. One of these is the angel appearing in a dream to St. Joseph, but a number of features argue against its being either of the two Gospel episodes recounting his prophetic dreams.1 First, it would be wholly atypical for St. Joseph to be depicted nude or nearly nude as the male figure here clearly is. Second, it would be unusual to depict an angel as explicitly female, dressed in clingy, flowing, and diaphanous robes. And third, Cambiaso ordinarily depicted angels with large feathery wings.2

A subject from classical mythology seems more likely for this drawing, and Miles Chappell and Larry Bell proposed that it represents Odysseus being addressed by Nausicaa, Athena, or Penelope.3 The image lacks, however, any attributes that would assist in identifying either the male or female figure specifically. Cambiaso treated numerous mythological subjects in the course of his career, completing monumental paintings on such themes as Venus and Adonis, Apollo and Daphne, the Rape of Proserpina, and the Return of Ulysses; but this drawing does not correspond to any of those compositions.4

This drawing, executed in fluent, dynamic pen strokes, is in what Bertina Suida Manning described as Cambiasoâs âsweeter style,â in contrast to his perhaps more well-known stereometric style, seen in the Arrest of Christ in this exhibition.5 The fingers of the male figureâs right hand provide an echo of Cambiasoâs other, more abstracting manner of representation.