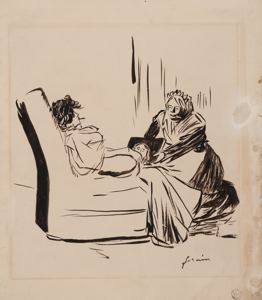 Beginning his painting career alongside such artists as Edgar Degas and Eduard Manet, Jean-Louis Forain is best known for his graphic works. These include masterful lithographs and etchings, and the numerous satirical illustrations depicting daily life he made for such journals and reviews as Le Journal amusant, Le Rive, Le Figaro, and La Vie parisienne.1 Forainâs life and work reveal a complex individual, with contradictory character traits, whose career did not develop neatly from one period or subject matter to another. Later in life Forain retained his interest in the everyday world around him, particularly its gaieties and cafÃ© life, even while he embarked on new subject matter such as the law courts or religious subjects.

Forainâs fascination with the vicissitudes of the world of the theatre, the cafÃ©, and the street should not be mistaken for a critique of the lives he depicted. Mistress and her Maid exemplifies Forainâs ability to provoke genuine interest in his subjects without condemning their promiscuous, or at least questionable, behavior. This drawing is contrived to suggest a casual moment in the French demimonde, with a mistress and her maid in an informal, domestic scenario. Wearing a revealing dressing gown, the mistress comfortably rests in an armchair, her bare breasts and cigarette immediately identifying her as a promiscuous demimondaine to a contemporary audience.2 Expressing tiredness with her feet propped up, and perhaps even boredom, the mistress seems to look carefully at the picture her grinning maid is holding, but the significance of the moment remains obscure.

It is difficult to link this drawing to one of Forainâs print series, although the abbreviated style and subject matter most resemble the illustrations of the series, Le Cabinet particulier (Private Rooms) started in 1893.3 Le Cabinet particulier can be seen as an accurate representation in the Realist tradition of libertine behavior in the 1890âs to about 1910. The life of the prostitute had been portrayed in literature as early as 1848, and Forain was very likely familiar with ZolÃ âs Nana of 1880, which describes the life of the demimonde and a courtesan in this era. The women in the Private Rooms are not objects of the painterâs aesthetic analysis but rather they are specifically shown in a social context, comparable to the scene of the Mistress and her Maid.

While Jean-Louis Forain rarely signed or dated his drawings as he produced them in such large quantities, the signature on this drawing helps to date it. Forain changed his signature from âJ.L. Forainâ to âForainâ after 1880, when Degas remarked that it resembled another contemporaryâs signature.4

1Alicia Craig Faxon, Jean-Louis Forain: A Catalogue RaisonnÃ© of the Prints, New York, 1982, 10â11.
2Emily Apler, âSpaces of the Demimonde/Subcultures of Decadence: 1840â1990,â in Perennial Decay: On the Aesthetics and Politics of Decadence, eds. Liz Constable, Dennis Denisoff, and Matthew Potolsky, Philadelphia, 1999, 142â158.
3Faxon, Forain, 54. There are thirteen prints in the series, which span 1893â1910. Many brasseries had upstairs rooms or cabinets particuliers where male clients could retire for additional entertainment from prostitutes.
4Lillian Browse, Forain: The Painter (1852â1931), London, 1978, 14.

Bibliography
Apler, Emily. "Spaces of the Demimonde/Subcultures of Decadence: 1840â1990." In Perennial Decay: On the Aesthetics and Politics of Decadence, edited by Liz Constable, Dennis Denisoff and Matthew Potolsky, 142â158. Philadelphia: University of Pennsylvannia, 1999.