Study for Assumption of the Virgin Mary 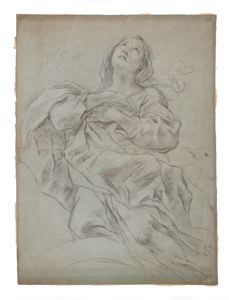 Study for Assumption of the Virgin Mary

Goedde Class
Black chalk, in contrast with red chalk, is more friable and less able to take a point, and is more typically used to broadly define form and areas of light and shadow as we see in Beinaschiâs Assumption of the Virgin Mary. Here it is used on blue paper, which provides a middle tone from which the artist works down to darks with the black chalk and up to white highlights using white chalk. White gouache (opaque watercolor) was also used for this heightening function. The use of chalks together like this was common from the sixteenth century onward.

Previously attributed to both Guido Reni, as evidenced by the old inscription on the verso,1 and Giovanni Lanfranco, this spirited drawing is in fact the work of the Roman artist Giovanni Battista Beinaschi. Beinaschi was deeply indebted to Lanfranco for his illusionism and lively figures with softly modeled facial features. However, Lanfrancoâs own drawings tend toward rendering figures with a sense of arrested motion, which imbues them with a more sculptural quality, while Beinaschiâs characteristic looseness in modeling lends his studies a greater sense of movement.2

Though the present sheet cannot be associated with any of Beinaschiâs known surviving works, its handling is quite close to several drawings executed by the artist around 1670â1680, most notably an Assumption of the Virgin (Ottawa, National Gallery of Canada), which has recently been dated to around 1680â1682.3 The exact subject of the Herman drawing is difficult to determine. Given the iconography, it could plausibly have been intended as a study for an Assumption or Coronation of the Virgin or, less probably, an Immaculate Conception. The Virginâs upturned face and hands folded over her chest suggest that it was likely preparatory for a now-lost or never executed Assumption scene, a supposition further bolstered by the numerous surviving examples of this subject within Beinaschiâs work.4

While the verso of the drawing bears the name âCrozat,â undoubtedly a reference to Pierre Crozat (1665â1740), one of the most important collectors of drawings in the eighteenth century, it would seem highly unlikely that the Herman drawing was once a part of this famous collection. Drawings from Crozatâs collection bear a handwritten number in pen and ink at the lower right corner of the sheet.5 In all likelihood, a later owner added this inscription in an attempt to increase the importance of this drawing.6

1This inscription led the drawing to be exhibited as preparatory for Reniâs fresco of the Coronation of the Virgin with Four Saints of ca. 1595 in the Pinacoteca Nazionale, Bologna. The clear differences in position of the Virginâs head and arrangement of her arms prevents such an association.
2Jacob Bean and Walter Vitzthum, âDisegni del Lanfranco e del Benaschi,â Bolletino dâarte, 46, 1961, 106-122.
3Vincenzo Pacelli and Francesco Petrucci, Giovan Battista Beinaschi: Pittore barocco tra Roma e Napoli, Rome, 2011, p. 260. The Ottawa drawing, much like that in the Herman Collection, was previously given to Lanfranco.
4The Virginâs posture, with the exception of her folded hands, is particularly close to Beinaschiâs depiction of the subject in the Lemme Collection, Palazzo Chigi (inv. CL19). See Pacelli and Petrucci, p. 252, cat. A22.
5Lugt 3612. See the revised entry of March 2010 http://www.marquesdecollections.fr/detail.cfm/marque/11120
6The choice of inscribing the drawing with Crozatâs last name might well have been suggested by the custom of the famous Mariette family, who dealt in and collected prints and drawings in the seventeenth and early eighteenth centuries and who inscribed works with their last name (see L. 1786b, 1788-1790).

Your current search criteria is: Objects is "Study for Assumption of the Virgin Mary".