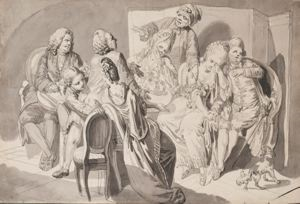 This drawing depicts two families animatedly negotiating a marriage contract. In the early modern period, marriages were typically arranged to cement alliances and exchange or acquire land and property. Marriage was understood as a civil contract as well as a holy sacrament, and a legal contract defining the terms of a marriage was standard by the eighteenth century.1 By the mid-eighteenth century, however, a profound shift in ideas about marriage was underway and a growing number of couples married for love or companionship.2 Schenauâs genre scene comments on this contemporary social upheaval, playing on social conventions of etiquette and class behavior.3

Based on the exaggerated gestures of the characters, we can intuit the troubled state of the negotiations and the emotions of the individuals. Looking first at the young couple at right, the bride-to-beâs pose violates eighteenth-century decorum. She sits immodestly with her knees and ankles apart, leaning on her loverâs shoulder and holding his hand in an explicit show of affection, suggesting an indiscretion.4 The emphatic gestures of the groomâs parentsâthe seated lady and the standing gentlemen in the foregroundâreiterate this indiscretion as they gesture toward the bride-to-beâs parted legs. The brideâs parentsâseated across from the groomâs parentsâreact instinctively to the accusation. The mother throws up her hands in disbelief as the father recoils from the table, laying a protective arm on his daughter. The groom, whose tightly crossed legs contrast sharply with his fiancÃ©eâs, gestures melodramatically, as if the accusation of indiscretion is absurd and insupportable. The notary at left, who sits with the contract before him, grimaces in annoyance as the parents argue. Contractual negotiations have clearly broken down and the dowry on the table is still in the brideâs parentsâ possession. Despite the bride-to-beâs compromised purity, the young couple still appears to be in love as signaled by their clasped hands, and the presence of a small dogâa symbol of loyaltyâin the lower right corner. Adding intrigue to the scene, the notaryâs young clerk leans behind the groomâs father, suggestively talking behind his back with his wife.

Though little known today, Schenau was a successful painter of portraits and genre subjects in Dresden and Paris. Genre scenes like this drawing provided an intimate peek into the private lives of real and imagined individuals, and encouraged âelevated discourseâ through a universally familiar subject like marriage.5 Similar commentary on issues of marriage can also be seen in the work of Jean Baptist Greuze (French, 1725â1805) and William Hogarth (English, 1697â1764), both of whom influenced Schenau.6 Schenauâs works of the third quarter of the eighteenth century played a vital role in the cross-fertilization of subject matter and style between France and Germany in the period. So charming and popular were Schenauâs designs that in 1796 he was named the director of the drawing school for Meissen, the great eighteenth-century porcelain manufacturer.

Your current search criteria is: Objects is "The Marriage Contract".