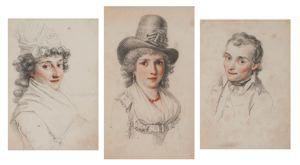 While these drawings were acquired as the work of Johann Heinrich Tischbein, Cara Dufour Denison identified their author as Jean Baptiste Joseph Wicar, noting their resemblance to three black-and-red-chalk drawings of nearly identical size in the Pierpont Morgan Library.1 The Herman drawings typify Wicarâs portrait drawings in their delicacy of touch and engaging immediacy and frankness, created by the different glances, tilts of head, and eye and mouth expressions distinctive to each sitter. The drawingsâ small scale connects them to similar images Wicar drew and often gave to his friends.

These portraits are also very likely related to a sketchbook Wicar filled with portraits in Rome beginning around 1800.2 The Roman sketches depict similar fashions as well as the same regular outlines, structural volume in the faces, and bust-length formats.3 Only the use of red chalk differentiates the Herman drawings from the Roman sketchbook.

Although Jean Baptiste Joseph Wicar was a student of the famous neoclassical painter Jacques-Louis David (1748â1825), he is best known as a draughtsman and art collector. By the late 1790s, some artists like Wicar began to explore drawing as an independent medium, rather than treating it primarily as a preparatory step in producing paintings. As director of the French Academy of Fine Arts in Rome between 1806 and 1809, Wicar emphasized drawing and figural studies, as well as copying old master works, with the desire to promote drawing as fundamental to art education.4 Because Wicar was primarily a draftsman, some contemporaries including David himself thought him unable to formulate an individual style, though they appreciated his talent.5

Wicarâs drawings exemplify the way early nineteenth-century portrait drawings create a sense of intimacy between viewer and subject and suggest each sitterâs individual psychology. These images also remind us that amid the periodâs grand history paintings, such delicate and sophisticated portrait drawings were prized as well.

Your current search criteria is: Objects is "Three Portrait Drawings".