Owl Drinking Tea in an Armchair (recto); Deer in a Jacket from Behind (verso) 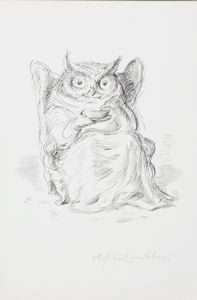 Owl Drinking Tea in an Armchair (recto); Deer in a Jacket from Behind (verso)

Although serious political images and social satire dominate A. Paul Weberâs six-decade-long oeuvre, his playful drawings of animals lend a refreshing humor to his art. The prolific German artist is most recognized for his political activism and illustrations for the Widerstands-Verlag, (Resistance Press) opposing Hitler. This aspect of his work emphasizes social commentary, political criticism, militarism, and concerns about environmental pollution. It reflects his anxiety about technological advances and his skepticism of twentieth-century political leadership. In contrast to his darker images, in the post-war years Weber focused on the depiction of animals. This category of his work includes humorous social satires and images intended to amuse children.

Weberâs personification of animals continued in the tradition of Aesopâs Fables, portraying sometimes disturbingly human characteristics. Additionally, he produced drawings following the popular tales by Beatrix Potter (1866â1943) and animations by Walt Disney (1901â1966). Weberâs interest in his natural surroundings began during his boyhood participation in the Jungwandervogel, a community that fostered appreciation for the outdoors through hiking.2 This attentiveness to the natural world reappeared in his intricate visual representations of animals in the 1950s, when he prepared numerous comical drawings of animals aimed at young audiences. These were intended for the Bergedorfer Lichtwark-Kalendar, a popular childrenâs calendar published by the Lichtwark Foundation.3 These playful animal drawings mildly caricature human behavior, conveying an overall sweet and charming mood.

Perhaps a sketch for the Kalendar, Weberâs Owl Drinking fits into this light-hearted category of his work; the lively owl clearly appears as one of Weberâs favored themes during the time. The nocturnal bird, occupying his wings with a large cup of tea, characterizes a person snuggling into a comfortable chair with a blanket. The deer, depicted on the verso, emerges far less often in the artistâs drawings. The deer runs away from the viewer, dressed in a morning coat and shoes, and he carries a parcel under his arm. Large antlers stem from the deerâs head, and his tail playfully swings from under the jacket. The overall image seems slightly more satirical than the cozy owl, perhaps suggesting an overlap between his animal drawings for children and those for mature audiences.

Your current search criteria is: Objects is "Owl Drinking Tea in an Armchair (recto); Deer in a Jacket from Behind (verso)".