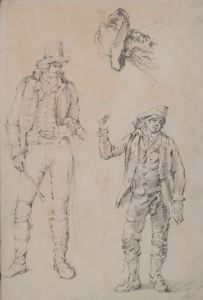 This sketch by the English painter James Ward is apparently a preparatory study for his painting, A Livery Stable, now in the Detroit Institute of Arts, which he mezzotinted and published in 1796.1 The differences between the sketch and the painting suggest significant changes to the composition on the artistâs part after it was already well underway. The gentleman to the left in the sketch appears in the painting in almost exactly the way he is shown in the drawing. The only additions are the spurs on his riding boots and the tails of his coat. Interestingly, the traces of the female figure holding his arm in the drawing correspond almost exactly to the painting, indicating that she was already well defined when the Herman drawing was made. Alterations to other figures, however, seem to have significantly changed the social dynamic of the piece. The figure of the boy on the right of the drawing holding a bridle has been replaced in the painting by a stable hand more intent on controlling the horse and facing the animal directly. He has also lost the hat and boots seen in the drawing, alterations that differentiate the stable boy from the gentleman, emphasizing his role as the caretaker, whereas the gentleman is the owner and rider. The third person in the drawing, a bust of a man with shoulder-length hair wearing a hat, does not appear in the painting. Instead, we see a man at far left with his hat held at his side, addressing the gentleman and lady with some solicitousness. In general, the changes to the composition from drawing to painting suggest an insistence on social distinctions.

Though there are few published sketches by Ward, the Herman drawing resembles a sketch for a painting engraved 1793 titled The Haymakers,2 and the signature is consistent with Wardâs.3 Ward was an ambitious artist, who, despite coming from a poor background, became one of the leading mezzotinters in England and in the 1790s gained increasing success as a painter, working in the manner of George Morland.4 His scenes of rustic life, the hunt, and horsemanship were part of a larger English taste for depictions of the country life and gentlemanly pursuits, and a tendency to render charming vignettes of rural pastimes among the lower classes, and when the social ranks mix as here, emphasizing the superior status of the upper classes.

Your current search criteria is: Objects is "Figure Studies for "A Livery Stable".