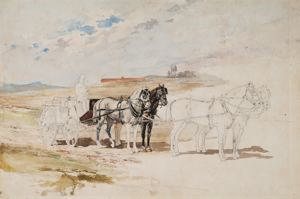 Limited scholarship on Emil Volkers exists and, though many of his paintings have been identified, little is known about the artist and his work. This meticulously sketched and partially finished watercolor of a carriage with a driver and four horses provides a rare glimpse into Volkersâ working methods. While this drawingâs original purpose remains unknownâindeed very few drawings attributed to Volkers existâcomparison with a related painting, Carriage and Four on a Country Road (1889), strongly suggests that he used such watercolors as preparatory studies for his highly finished, precisely detailed oil paintings.1

Volkers was trained as a painter, draughtsman and lithographer at academies in Dresden, Munich, and DÃ¼sseldorf, and he earned his living primarily as a painter of equestrian portraits and genre scenes.2 Here he demonstrates his great technical facility as a draftsman, and his first-hand knowledge of equine anatomy and equestrian sport is evident in the careful pencil underdrawing of the horses, carriage, and driver. The underdrawing provides a basic outline upon which Volkers laid down the watercolors, creating subtle effects of light, texture and atmosphere. Heavily diffused blue, purple and pink pigments create the soft expanse of sky, while nearly dry brown and green pigments suggest grass and the loose soil of the road. The precise detail in the pencil sketch in combination with the watercolor washes suggest that Volkers made this preparatory sketch from life en plein air. While artists had worked outdoors in the past, it became a particularly popular practice in the 1870s with the introduction of readymade, affordable paints.3 Overall, Volkersâ use of pigment is restrained and the underdrawing remains visible even in areas with a comparatively high level of finish. As a result, we can see the transformative process by which a sketch becomes a painting as additional layers of paint are added.

Equestrian subjects were increasingly popular in the late eighteenth and early nineteenth centuries as Western European governments improved roadways, and increased wealth following the Industrial Revolution stimulated the consumption of luxury items like carriages.4 The phaeton-style carriage depicted here was a particularly fashionable model used for pleasure driving and exercise purposes. Typically drawn by one or two horses, here it is hitched to four horsesâan unnecessary but impressive extravagance. Works like Carriage with Four Horses were commissioned by wealthy patrons as records of their affluence and style. Ultimately, the increasing popularity of the railway system after 1830 brought about the demise of the coaching era, and carriages became nostalgic symbols of a bygone past.5

Your current search criteria is: Objects is "Carriage with Four Horses".