View of a Hill Town and Travelers on a Road 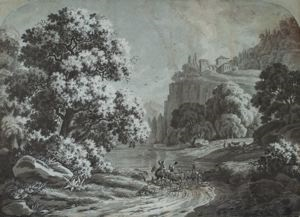 View of a Hill Town and Travelers on a Road

The painter and draftsman Joris van der Haagen was most likely born either in Arnhem, where he is first documented as working, or Dordrecht, where his father Abraham was active as a painter until 1613. Like most children coming from an artisanal background, Joris probably received his early training from his father. Upon his fatherâs death in 1639, the young artist moved to The Hague, where he joined the Guild of St. Luke four years later.

Though previously attributed to Jan van der Meer II (1656â1705), this drawing finds few parallels with the works of this Haarlem-based artist active at the end of the seventeenth century. An attribution to van der Haagen or an artist in his circle is proposed here instead. Van der Haagenâs drawings in ink and wash with white highlights on blue paper were highly regarded by his contemporaries and collectors of the eighteenth century alike. In the third volume of his Groote Schouburgh, a text devoted to the lives of Netherlandish painters published in 1721, Arnold Houbraken wrote that the artist âspent most of his time on the depiction of landscapes around Kleef and other areas, which he executed with great spirit in pen and brush, on white and blue paper.â1

While the choice of medium is wholly typical of van der Haagen, the Italianate subject matter does not accord with either Houbrakenâs commentary or any known drawings by the artist. However, van der Haagen is known to have collaborated with Nicolaes Berchem, making such subject matter not entirely implausible within his work. Indeed, the figures on horseback at the waterâs edge are entirely in the spirit of Berchemâs work. The liberal use of wash, so evident in the execution of the rock at the lower left, finds some parallels in van der Haagenâs works, such as the left foreground of his View of Lichtenberg Castle, near Maastricht.2 However, the drawing is most similar in style to a work in brown ink and brown and gray wash formerly in the collection of Einar Perman where it was given to Jan van der Meer II but is now ascribed to an anonymous Dutch artist active around 1700.3 Further research may conclusively determine the draftsman responsible for this fine sheet from the Herman collection. Either van der Haagen himself or an artist in his circle seems to provide the most fruitful avenue for such research.

Your current search criteria is: Objects is "View of a Hill Town and Travelers on a Road".