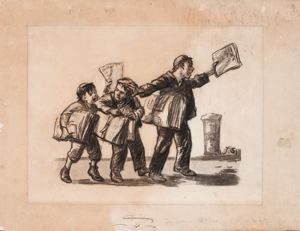 The American artist John Sloan studied at the Pennsylvania Academy of Fine Arts in Philadelphia where he learned classical artistic techniques. In Philadelphia, while working as a newspaper illustrator, he met artists who would later be known as âThe Eight.â1 These included Robert Henri, who became a great friend and artistic inspiration to Sloan, who affectionately referred to Henri as âmy father in art.â2 In 1904, Sloan moved to New York where he began to make works for sale while illustrating for magazines. One of the distinguishing traits of Sloanâs life in New York was his engagement with modern street life. This preference classified him as a member of the âAshcan School,â a group comprised of former newspaper illustrators who were also disciples of Henri in Philadelphia, and who had all moved to New York around the turn of the century to pursue painting urban scenes.3

Boys Selling Newspapers is not dated, but features of style and treatment suggest a date between 1903 and 1916. Before 1903, Sloanâs style was characterized by simple, flat lines used to define form. In New York, his style became increasingly dynamic and textural, as seen in the independent etchings he began to make at this time.4 After 1916, he produced fewer illustrations and focused on color theory, nudes, and landscapes.5

This drawing can probably be classified as one of Sloanâs âmemory pictures.â He used this term to refer to ânarrative images based on incidents seen and reconstructed in the mind, filled with visual clues that identify characters and situations.â6 In this image, Sloan focuses on newsboys, ubiquitous figures in city street life, as he applies the techniques of classic compositional structure to depicting these lower-class boys, fervently hawking newspapers.7 The three figures are tightly linked by the diagonals of their arms and echoing legs and papers, and gradually increase in size. Through composition and his rich graphic stroke, he astutely characterizes three children and their relationships, suggesting the sibling rivalry of the two older boys and the eagerness of the youngest to keep up with the others.

The scrawled pencil inscription âTuesday [or perhaps Thursday] a.m.,â along with the markings of dimensions, suggest that this drawing was made on a deadline and was to be reproduced, though no printed or painted version of this composition is known.

Your current search criteria is: Objects is "Boys Selling Newspapers".