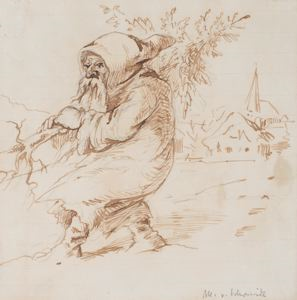 Like other German artists of the nineteenth centuryâamong them Carl Gehrts, whose work is shown in this exhibitionâMoritz von Schwind embraced the depiction of fairy tales and folkloric themes. Despite his ambitions to be a fresco painter, von Schwindâs painting career was for the most part unsuccessful, and he turned to illustration to support himself, including the depiction of varied social themes and folklore.1 In this regard, he was fully in accord with the ideals and preoccupations of German Romanticism, in which fairytales and other types of folklore were seen as one of the distinctive forms of German literature and representative of the German common people.2

In the Herman drawing, von Schwind uses energetic pen lines to characterize Herr Winter as he trudges through snow carrying an uprooted fir tree, presumably to be used as a Christmas tree. The old manâs facial features and clothing are described in detail with numerous touches, while the setting is rendered with minimal fluent pen strokes to reveal a village and its church laden with snow. While the signature suggests that this is a finished drawing, its actual function is unclear. It is closely related to a number of von Schwindâs published depictions of Herr Winter, which appeared as wood engravings in the magazines MÃ¼nchner Bilderbogen and Fliegende BlÃ¤tter.3 In these illustrations, Herr Winter is not so much characterized as Father Christmas as he is seen as a familiar folkloric figure who brings cold weather and snow in winter.4 He appears in a variety of settings, indoor and out, in one visiting a peasant couple, in another attending a carnival masquerade ball, always bearded and wearing a heavy hooded cloak and mittens: the embodiment of the pleasures and discomforts of winter. In one especially evocative illustration, he is seen carrying a fir tree with candles on its branches, walking alone through a German town at night.5 Herr Winter in the Herman drawing resembles these images, but his beard and hood are drawn differently and heâs missing the crown of ivy leaves seen in the illustrations. This may suggest that it is a later, independent version of one of von Schwindâs most enduring characters.