Faust in His Study 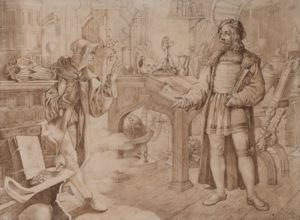 Faust in His Study

This exquisitely rendered sheet by Karl Friedrich Schulz depicts a critical moment in Part I of Johann Wolfgang von Goetheâs tragic play Faust, first published in 1808. Faust, seen at right, is approached in his study by the devil Mephistopheles, whose recent appearance is indicated by the remnants of smoke that still surround his lower body. Mephistopheles raises his left hand, as if to address Faust with his now-infamous propositionâif only Faust will surrender his soul to the devil upon his death, Mephistopheles will show Faust the secrets of the world and allow him to experience the most profound pleasures in life.

While Goethe popularized the story for a modern audience, it ultimately derives from the historical figure of Doctor Johann Georg Faust (ca. 1480 â ca. 1540), an itinerant alchemist, astrologer, and magician.1 Schulz recuperated some of the storyâs sixteenth-century origins by clothing his Faust in period garb that decidedly recalls the works of his artistic predecessor Albrecht DÃ¼rer. Indeed, DÃ¼rerâs own engraving of Saint Jerome in His Study from 1514 may well have provided direct inspiration for Schulzâs drawing. Like DÃ¼rer, Schulz has included such symbolic details as a skull and hourglass and has even appended his own DÃ¼rer-esque monogram to the cover of the book at the far left of his composition.2 Moreover, Schulzâs refined draftsmanship clearly recalls the works of DÃ¼rer and his sixteenth-century German contemporaries, a fine example of which is the Herman Collection drawing of St. Kunigunde from the workshop of Hans Holbein the Younger.

Schulz initially composed his work with a detailed pencil drawing, over which he began to trace the lines in pen and brown ink; for some reason, however, he left portions unfinished. The drawing ultimately served as the model for a lithograph executed by Hermann Eichens (1813â1886) for an illustrated publication in 1836 of Anton Heinrich von Radziwillâs musical score to accompany Goetheâs text.3 Though portions of the score were ready for a performance in 1820, it was not completed until 1831. It may be that in its original conception the book was to include etchings or engravings and that Schulz abandoned his pen tracing after it was decided that the prints would be executed in lithography instead.4 The lag time between the creation of the drawing in 1822 and the execution of the print in 1836 may also reflect the long time Radziwill required to complete his score.


1Paul Bates, Faust: Sources, Works, Criticism, New York, 1969, 86â89.
2Such an association was quite logical, as well. St. Jerome is most known for his translation of the Bible into Latin, while Faust grows frustrated in his attempts to translate the Gospel of John immediately prior to Mephistophelesâ appearance in Goetheâs play.
3Scenen zu Goetheâs Faust in acht lithographierten Bildern nach der Angabe des FÃ¼rsten Anton Radziwill zu seinem Compositionen des Faust, Berlin, 1836. Franz Neubert, Vom Doctor Faustus zu Goethes Faust, Leipzig, 1932, 128, 130, identifies this publication but misdates it to 1835, the year Radziwillâs score was first published.
4Julius Schnorr von Carolsfeld used the same technique in his roughly contemporary preparatory drawings for his famed Bibel in Bildern, which he originally intended to be produce as 240 etchings in brown ink.

Your current search criteria is: Objects is "Faust in His Study".