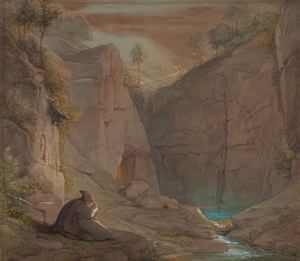 Born in Aachen, Caspar Johann Nepomuk Scheuren is most frequently associated with the DÃ¼sseldorf School of painting, founded by the Nazarine painters Peter von Cornelius and Wilhelm von Schadow.1 While Cornelius and Schadow are now recognized as two of the leading exponents of Romantic religious painting that looked to early Italian and German art for its models, Scheurenâs contemporaries Carl Friedrich Lessing and Johann Wilhelm Schirmer made the School a center of landscape painting toward the middle of the nineteenth century. Following in the footsteps of the great German Romantic painter Caspar David Friedrich, their landscapes are often imbued with a melancholic tone, frequently heightened by ruins or solitary figures dwarfed by the surrounding landscape in an attempt to return to the genuine religious expression of earlier periods.2

The present watercolor is a striking example of Scheurenâs artistic concerns in the 1840s. Following in the footsteps of Lessing in particular, Scheuren began to make colored views that unobtrusively tucked monks in solemn prayer within the landscape.3 While Friedrich often emphasized the sublime power of the natural world and humanityâs powerlessness within it, here Scheuren affirms the harmony between man and nature. So in tune with his natural surroundings is the monk that he appears to have been hewn directly from the cliffs like the Virgin and Child behind him. In addition, the light of the setting sun seemingly strikes deeply into this gorge to pick out the monk sunk in meditation, the content of which is suggested by the small white cross that the sun also catches, gleaming white, high against the sky almost directly above the hermit.

In technique, this drawing is characteristic of Scheurenâs works from the middle of the nineteenth century. In this period, he began to make numerous sketches of trees to which he applied watercolor in a distinctive way. The drawing, particularly in the foliage, is summary. Rapidly drawn loops stand in for whole clumps of leaves over which Scheuren applied broad passages of watercolor so as to create a work that appears to glow from within. Indeed, glowing light emanates from inside the open cave of the monkâs hermitage suggesting a warm if humble refuge amid natureâs grandeur.

Your current search criteria is: Objects is "Hermit Reading in Mountain Valley".