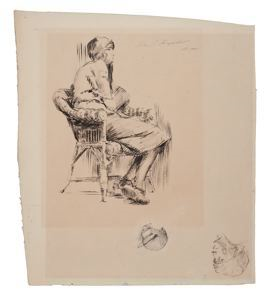 There is no direct parallel for this signed sketch among the extant drawings by the celebrated American portraitist John Singer Sargent. The vast majority of his drawings are executed in pencil or charcoal as opposed to pen and ink as here, though the rapid, sketchy, and highly varied linesâincluding an exploitation of dry pen linesâare analogous to his more sketchy pencil studies, as opposed to his more highly finished pencil and charcoal portrait drawings. The two inverted head studies at the bottom of the sheetâevidently the result of Sargentâs turning the sketch book around to treat the womanâs face in more detailâsuggest that he made the drawing spontaneously in one of the sketchbooks he customarily carried with him but at an odd moment without charcoal or a pencil handy.

Figural drawings of Sargentâs early career before 1905 typically served a preparatory function in the execution of his fashionable portrait paintings. By 1907, however, Sargentâs enthusiasm for formal portraiture had dwindled, and the artist sought a new direction, as he devoted more time to traveling and sketching as a means of invigorating his art.1 During the last ten years of his life, when this drawing was most likely executed, Sargent spent a lot of time in the United States, working on monumental mural cycles in the Boston Public Library and the Boston Museum of Fine Arts.2 He also traveled extensively in America, and he continued his lifelong habit of sketching everything. This drawing appears to come from this later period in his career, depicting a stylishly dressed, nonchalant young woman, perhaps relaxing on the shaded veranda of a seaside resort on a summer afternoon. The relatively short skirt, loose-fitting sleeves, and cloche hat would also argue for a date in the early 1920s.

Perhaps most striking is the artistâs virtuosity in the handling of the pen, which University of Virginia alumna Elizabeth Hutton Turner describes as matching âSargentâs impressionistic technique. Each mark carries with it information about the form as it is imparted by the light. Furious hatching throws the figure in relief; dryer strokes create the middle values along the legs and the right side; and the white of the paper highlights the head and shoulders. Slight dashes and arabesques suffice for facial features bathed in light. Deep black accents, such as the contour of the back, the webbing of the chair, and the sole of the shoe focus the image.â3 Though a less accustomed medium, Sargent here handles the pen with all the flair and brilliance of execution we find in his watercolors and paintings.

Your current search criteria is: Objects is "Woman Seated in a Wicker Chair".