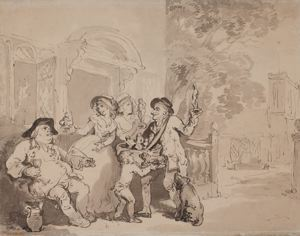 The British watercolorist and printmaker Thomas Rowlandson is celebrated for his prolific production of prints and drawings satirizing British society in the late eighteenth and early nineteenth centuries. In The Wax Model Seller, which typifies work from his transitional period of 1790 to 1800, Rowlandson renders a street scene with his characteristically fluent pen strokes and vivacious brushwork, abandoning labored draftsmanship for spontaneous lines suggesting attire, psychology, and social attitude.1 The fully worked-out delineation of his subjects suggests that this is a preparatory sketch for an etching, but no print of this subject is known.

Rowlandson, like William Hogarth and James Gillray, was a major figure in the efflorescence of British satirical imagery for popular consumption.2 Authors like Alexander Pope, Jonathan Swift, and Henry Fielding wrote social satires, including Fieldingâs famous novel Tom Jones, which Rowlandson illustrated. Sanctioned by publishers, newspapers, and private collectors, over 20,000 satirical and humorous images were produced during the Golden Age of Graphic Satire.3

While Hogarthâs work was famous for its moralizing undertones, Rowlandson was known for portraying scenes from life without disguised commentary.4 In this drawing, for example, Rowlandson depicts a small, but socially diverse group in front of a substantial house near a village green, gathered around an itinerant wax-model salesman. The corpulent man seated at the left is mocked not only for his gout and commitment to his drink, but also for his excessive size, to which the young woman to his left alludes in pointing to a rotund Buddha figurine. Next to them the peddler attempts to sell a model to another, impressionable young woman who gazes at a nude classical figure with a sexualized undertone typical of the artist.5 Though Rowlandson is clearly producing social commentary, he parodies general class types rather than specific individuals. These caricatural types anticipate those appearing in many works like his famous, slightly later Doctor Syntax seriesâindeed, the wax-model seller strongly resembles Dr. Syntax himself.6

The subject of the wax-model seller very likely carried added connotations for Rowlandson. The wax model was, like the printed image, a contemporary artistic medium, and was easily reproduced and affordable for the middle classes.7 Rowlandson perhaps draws a comparison between this street salesman and himself as he in effect peddles to the viewer one of the 10,000 works he produced over the course of his career.

Your current search criteria is: Objects is "The Wax Model Seller".