Head of a Warrior 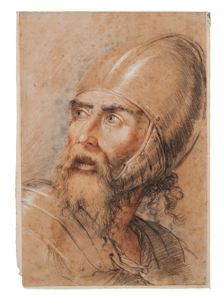 Head of a Warrior

This drawing depicts a bearded soldier wearing a helmet and armor, caught in the moment as he turns his head from the viewer to look over his right shoulder. The artist used the three-chalk techniqueâblack, red, and white chalkâwith touches of what seems to be blue chalk to capture a fleeting instant of response to something we can never see. As is typical of this use of different colored chalks, black chalk defines the head, facial features, hair and beard, and the helmet and armor; red chalk adds warmth to the skin and lips; white chalk highlights reflections in the armor and the skin around the eyes. The addition of what seems to be blue chalk in the eyes and beside the figure adds an additional element of color and life, heightening the momentary effect of the head as a whole.

The drawing is apparently signed, but Miles Chappell commented that while this study head âis clearly based on Rosaâs vocabulary and the signature clearly attempts to imitate Rosaâs manner of inscribing his works,â it is probably the work of âa Late Baroque artist working in the manner of Rosa.â1 Another authority, Konrad Oberhuber, suggested that it might be by an eighteenth-century French or German artist.2 Whatever the attribution, the drawing is clearly in the manner of Rosaâs chalk studies of heads, often seen from oblique angles to enhance the sense of capturing a split-second of life.3 Interestingly, this drawing apparently had a pendant, a head of a woman seen from behind (current location unknown).4 The complementary male and female heads, one from the front, the other from the rear, caught in motion and with the woman depicted in lost profile, typify Rosaâs interest in creating psychological intrigue in a moment of spontaneous action. This is also a characteristic Baroque concern for capturing momentary change that looks forward to the vivid energy of chalk study heads by such eighteenth-century masters as Tiepolo and Piazzetta.

Your current search criteria is: Objects is "Head of a Warrior".