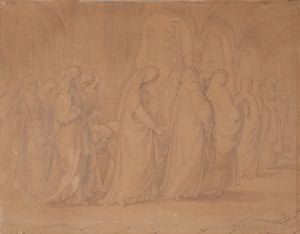 Born in Aachen in 1816, Alfred Rethel became one of the leading German Romantic illustrators, having created designs for editions of the Old Testament, Rhenish legends, and a haunting and enigmatic series entitled The Dance of Death that was deeply indebted to the woodcuts of Albrecht DÃ¼rer.1 Rethelâs illustrations are executed in a linear style that emphasizes contours and outlines to create form, which he almost assuredly developed having seen comparable designs by Moritz Retzsch, the leading German illustrator of the previous generation.

Though not specifically intended as a design for an illustration, the present drawing from the Herman collection takes as its subject the funeral of the MinnesÃ¤nger Heinrich Meissen, a subject Rethel had treated previously in a design for Adelheid von Stolterfothâs Rheinischer Sagenkreis of 1835 and would return to again in a watercolor of 1852 (both Dresden, Kupferstichkabinett).2 Heinrich Meissen, known as Frauenlob for his many songs praising women, was a traveling poet of the thirteenth century.3 His works were extremely popular during the three hundred years after his death but subsequently fell into obscurity. By the nineteenth century, Meissen had again become a popular figure, this time for the German Romantics, who saw in him the medieval ideals they sought to resurrect. Frauenlobâs distinct resemblance in this drawing to Dante probably reflects this medievalizing enthusiasm.

While the drawing of 1834 was executed in pen and focuses on a group of women lamenting over the MinnesÃ¤ngerâs body, the Herman drawing and the later drawing of 1852 emphasize the funeral procession with far more stoic, if equally somber, figures. As is appropriate given his favored subject matter, in each of these later drawings women accompany the bier to its final resting place in the Cathedral of Mainz. Moreover, both the Herman sheet and the watercolor of 1852 are conceived with an eye to the figuresâ plasticity. While Rethelâs preparatory illustrations are generally executed in a linear style, his finished compositions, such as the Portrait of Norbert BergmÃ¼ller of 1835 (Cologne, Wallraf-Richartz-Museum, inv. RBA 39 795), often show a far greater interest in modeling the figures with hatching and the addition of white chalk highlights on brownish paper, as can also be seen in the Herman sheet. The late drawing in Dresden accomplishes this same goal through the addition of subtly manipulated washes in watercolor.

That the Herman sheet was originally intended as a highly-finished composition and not preparatory for another work is equally confirmed by its early provenance, as it was executed following an 1840 commission by a Frau Springsfeld in Frankfurt am Main.4

Your current search criteria is: Objects is "Funeral Procession of the MinnesÃ¤nger Heinrich Meissen".