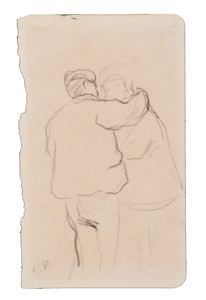 Camille Pissarro used black chalk to rapidly draw Two Figures in a pocket sketchbook. An avid draftsman, Pissarroâs quick and expressive lines form the abstracted outlines of the two menâs bodies. With their backs to the viewer, they engage in conversation as suggested by their embrace. The extreme lack of detail suggests the ephemeral nature of the pose, and Pissarro varies the pressure of his chalk to increase the energy and motion of the intimate composition. Typical of the artistâs cursory studies made on site, Pissarro economically renders the most basic information about a silhouette or figural relationship. As a kind of aide mÃ©moire, such drawings studying quotidian movements and occurrences acted as a first stage of Pissarroâs preparatory practices, though any given drawing may not have proven useful later in the studio.1

Often considered as the âFather of Impressionism,â Pissarro ushered in a modern, expressive drawing style, often featuring the human form. His childhood in the Virgin Islands and travels to Venezuela initiated his close encounters with nature and observation of peasant life, two recurring themes in his oeuvre. Following his move to Paris in 1855, the details of Pissarroâs subsequent training remain contested; he most likely studied, however briefly, at the Ãcole des Beaux-Arts or the AcadÃ©mie Suisse and perhaps informally under the landscape painter Jean-Baptiste-Camille Corot (1796â1875).2 From early in his artistic education, Pissarro recognized drawingâs importance as a preparation for his oil paintings and as an independent exercise, even as he was increasingly concerned with capturing spontaneity of gesture and the impression of reality. He drew incessantly, making several preparatory studies for almost all of his paintings, reworking complex compositions or gathering visual information.3 Although Pissarroâs drawing practices may seem contradictory to the immediacy of his Impressionistic landscape paintings created en plein air, they reveal the significance of draftsmanship within his oeuvre.

Two Figures is characteristic of Pissarroâs work during the 1880s, in which he often depicts peasants in the fields or at the market. Characteristic of that date too is his increasingly abstracted treatment of figures, resembling the quick studies he made at the market. While Pissarroâs subject matter suggests his connection to the themes of rural poverty of his Realist predecessors, reading his political beliefs into these idyllic, agrarian scenes and cityscapes remains disputed.4 In any case, his rapid drawing style and interest in movement typify Impressionism and look forward to subsequent Modernist art currents.

Your current search criteria is: Objects is "Two Figures".