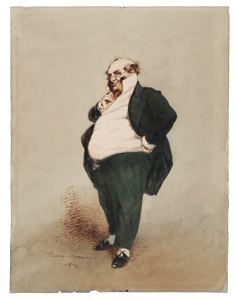 This highly finished drawing by French actor, writer, and artist Henry Monnier depicts Joseph Prudhomme, a figure who, as the subject of Monnierâs own theatrical performances, writings, and caricature illustrations, embodied the nineteenth-century French bourgeoisie. Prudhomme satirized the collective middle class, reflecting the social structure and cultural norms of Paris after âHausmannization,â the complete revamping of cityscape and population in Paris under Baron Hausmann.1 The new social landscape meant that class, profession, attitude, and circumstance increasingly defined the Parisian individual.2

Monnier first introduced the Prudhomme character in a lithographic series entitled Scenes Populaires of 1830. Prudhomme became the principle motif running through all aspects of Monnierâs career, as the subject of his theatrical works, literary pieces, lithographs, and finished drawings like this one.3 Also critical to the development of Prudhomme as a character type were Monnierâs contemporaries HonorÃ© de Balzac and HonorÃ© Daumier.4 The three shared ideas, and each featured the character in his work, Balzac in his writing, Daumier in his own caricatures, and Monnier frequently acted the part of Prudhomme in his theatrical productions.5 A member of the bourgeoisie himself, Monnier acknowledged his own reflection in Joseph Prudhomme, and as Monnier matured, so did his illustrations of Prudhomme.

The name Prudhomme derived from a verbal pun: in the seventeenth and eighteenth centuries the word âprudhommeâ was used to describe a man of probity and sagacity; Monnierâs pompous type inverts these virtues.6 In this drawing and in other depictions, he pretentiously poses as a man of judgment with an appraising air. On stage he talks down to those of his own social rank and ingratiates himself with the elite. Prudhomme was known for his banal, sententious statements.7 His curiosity led him to ask indiscreet questions, yet rather than waiting for answers, he preferred to talk about himself and his vast experiences.8

Physically, the Herman drawing conforms to the Prudhomme character as Monnier depicted him in person: short and stout with a round bald head adorned with a single tuft of hair. He wears round spectacles and his mouth curves causing a slight protrusion of the lower lip. Dressed in a tailored coat with wide lapels, Prudhomme wears an enormous white collar nearly covering his ears, and white gaiters cover polished boots. Prudhomme exudes a self-satisfied demeanor in his typical bourgeois attire.9

A faint, perhaps erased, inscription above the signature, âÃ  mon ami Bondy (to my friend Bondy)â, suggests that this drawing was intended for a personal acquaintance of the artist, but this person has not yet been identified.10

Your current search criteria is: Objects is "Joseph Prudhomme Standing".