Studies of a Man and Hands for "Harvesters Resting (Ruth and Boaz)" (recto); Study of Two Women for "The Potato Harvest" (verso) 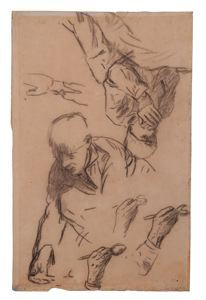 Studies of a Man and Hands for "Harvesters Resting (Ruth and Boaz)" (recto); Study of Two Women for "The Potato Harvest" (verso)

Jean-FranÃ§ois Millet was one of the most prolific Realist painters. His paintings depict peasant life in rural France and express his social awareness particularly concerning the hardships of agrarian life. Contemporary art critics considered Milletâs elevation of working class subjects to the realm of academic art aesthetically and politically subversive.1

The recto of this drawing depicts studies of two figures as well as the specific hand gesture of holding a spoon. In both his drawings and paintings Millet demonstrates acute sensitivity to hand gesture perhaps because hands are the tools of peasant labor.2 Millet drew this study in preparation for his large-scale painting Harvesters Resting (Ruth and Boaz) of 1853 (Museum of Fine Arts, Boston).3 The figure at the bottom of the drawing corresponds to the central man seated amid the figures in the foreground group. The painted figure is little changed from the drawing. The study suggests an interest in eating given the bottom figureâs reaching arm. The top, inverted figure shows the man at the far right of the painting, clasping his hands to his mouth in another suggestion of eating. Eating is further emphasized by the studies of hands holding spoons.

On the reverse, Millet has drawn two women holding what appears to be a large sack. This study is most likely a preparatory work for The Potato Harvest, 1854â1857 (The Walters Art Museum, Baltimore).4 The Baltimore painting shows a man and a woman holding a potato sack in the same postures and gestures as the two women in the drawing. Millet has only transformed the left figure from female to male. Interestingly, the verso of the Herman sheet shows Millet working out a compositional scheme whereas the studies on the recto focus on individual poses. In other words, Millet would have made the sketches on the recto at a later stage in the preparatory process as he worked out individual figures after finalizing their general arrangement.5 The drawing on the reverse belongs to an earlier stage in Milletâs preparatory process.

Milletâs social concerns are evident here. In Harvesterâs Resting, the laborersâ interest in food is only natural after hard fieldwork, and the title of the painting refers to the Biblical narrative of the wealthy farmer Boaz falling in love with an impoverished gleaner, Ruth, reflecting the idea of divine favor for the poorest of the poor.6 Likewise, the pair in The Potato Harvest clearly labors heavily with the potato sacks. Most importantly, these elements are preserved in the Herman drawings as examples of Milletâs desire to depict working people with stoic dignity and respect.

Your current search criteria is: Objects is "Studies of a Man and Hands for "Harvesters Resting (Ruth and Boaz)" (recto); Study of Two Women for "The Potato Harvest" (verso)".