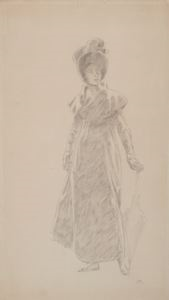 In Standing Girl Wearing a Bonnet, Jean Louis Ernest Meissonier skillfully depicts a young Parisian on a stroll about the city with a parasol. Appearing to be from the artistâs sketchbook, the black chalk drawing on blue paperâânow greatly fadedââmaintains a high degree of finish and energy. The light touch of the avid draughtsman renders delicate facial features and allows light to dance across her chic outerwear. Her pivoting pose and placement subtly to the right of center increases the liveliness of the drawing. The pentimenti surrounding her hands and feet testify to the care and precision of the artist in developing this drawing into a fully conceived work of art. With no known work related to it, Meissonierâs drawing does not appear to be a preparatory study; it was most likely intended for sale.

Meissonier was largely self-taught but enjoyed a prosperous career for over fifty years, supported by the conservative Parisian bourgeoisie.1 Favored for his refined drawings and paintings, Meissonierâs reputation steadily rose in the 1830s. Six years after his initial submission, Meissonier won his first medal at the annual Salon in 1840. The numerous awards and honors he received, including the Legion of Honor (1846), election to the AcadÃ©mie des Beaux-Arts (1861), and the Grand Cross (1889), reflect his established position in society. Celebrated during his life, Meissonierâs subject matter, style, and alignment with tastes of wealthy Salon-goers garnered criticism from progressive artists in the late nineteenth century, and his reputation has remained in eclipse in the twentieth and twenty-first centuries.2

Within Meissonierâs oeuvre, which was dominated by genre scenes set in the past and military subjects, Standing Girl Wearing a Bonnet serves as one of his rare depictions of a female subject. Characteristic of his drawings is the artistâs monogram without a date in the lower right corner. Parisian nineteenth-century fashion plates suggest that Meissonierâs drawing was probably completed in the 1830s to 1840s. The empire-waist and A-line silhouette of her outerwear resembles that of womenâs promenade costumes featured in fashion plates from 1815 to 1825, with her oval bonnet becoming the height of fashion from 1820 to 1840.3 The hypothesized date for this drawing accounts for the three to ten year lag-time between the introduction of the idealized trend on the plate and when women actually wore the style,4 while ending before voluminous skirts and natural waist-lines became popular in womenâs wardrobes.

Your current search criteria is: Objects is "Standing Girl Wearing a Bonnet".