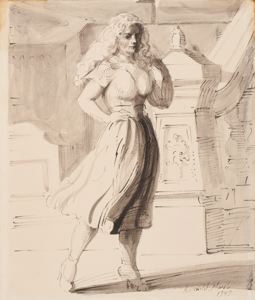 Though born in Paris, Reginald Marsh spent most of his life in America and began taking art classes from the Ashcan School artist John Sloan when he attended Yale in 1916. The Ashcan artists were characterized by their depiction of the lower working class, a subject previously deemed too lowly for American art.1 Marsh, like Sloan, dedicated his career to depicting the reality of the city around him, and yet to complement this modern subject, Marsh frequently drew upon the works of old masters like Rubens and Delacroix. The influence of Rubenesque female types is especially apparent in this drawing.2

In New York Marsh observed people walking by his Fourteenth Street studio, going about their everyday lives, and these were the figures that inspired his work.3 Marsh was seldom without his sketchpad, which he would fill with observations and rough drawings; he sometimes took photographs of the things he wished to remember in more detail.4 Occasionally, he would even approach people and ask them to pose a certain way in order to play out a scene he was envisioning. Marsh would then return to his studio to complete his finished drawings and paintings. His work ârepresents observed, remembered, and imagined forms.â5 It fuses his real-world observations, his artistic training, and his vibrant imagination to create a unique perspective on the world around him. Comparing this completed drawing to sketches of comparable women, one can see how Marsh began with sketches from life and filled in the gaps in the studio.6 The meticulous construction of this composition, juxtaposing the natural curves of the woman with the rectilinear geometries of the architecture behind her, evinces Marshâs characteristic re-envisioning of a transient moment.

The Herman drawing is an example of the âMarsh Girl,â a type that he was famous for and that firmly departs from Charles Dana Gibsonâs âGibson Girlâ from the beginning of the twentieth century.7 Instead of the idealized, conservatively dressed woman typical of Gibsonâs art, Marsh chose to render more voluptuous, fleshy women, the kind of women he might find walking around the city, and that populate his sketches, drawings, and paintings.

Your current search criteria is: Objects is "Girl Walking in Front of New York City Brownstone".