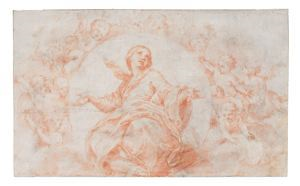 In this exquisite red chalk drawing, the main focus is a delicately rendered Virgin Mary gazing heavenward in an attitude of reverence, arms extended. A dynamic semi-circle of putti surrounds her. The drawing has been attributed to Carlo Maratti, the leading Roman Baroque painter of the late seventeenth century. He apparently executed the drawing in connection with the commission for the altarpiece for the Cybo Chapel in the church of Santa Maria del Popolo in Rome, which depicts St. John the Evangelist explaining the doctrine of the Immaculate Conception to three Doctors of the Church, Saints Gregory, Augustine, and John Chrysostom. The specific relationship of this drawing to the commission, however, is problematic because it does not conform to the typical categories of Marattiâs preparatory works.

Numerous preparatory drawings survive for the Cybo altarpiece, perhaps due to its being executed in oil directly on the wall. These drawings reveal that Marattiâs organization of the figures was in constant flux.1 However, these compositional drawings are usually executed in pen and do not exhibit the degree of finish visible in the Virgin. Maratti typically used red chalk for individual figure studies, done in the intermediate stage of preparation. The figures in such studies are usually isolated from a compositional context.2 The Virgin in the Herman drawing, however, is firmly placed in her celestial setting and exhibits a high degree of finish not characteristic of the artistâs pen and wash compositional studies. Indeed, the refined lines and delicately hatched modeling of this drawing are among its most striking features.

Upon closer examination, this drawing clearly reverses, with minor discrepancies, the painting in the Cybo Chapel, which suggests, along with its high degree of finish, that it is a study for an engraved reproduction of the altarpiece. Transferred to a copper plate, the resulting print would be in the same orientation as the original painting. Other drawings by Maratti for printed reproduction are executed in reverse.3 Although no engravings after the Cybo Chapel altarpiece are known, the characteristics of this drawing strongly suggest that it is a fragment of a highly finished modello in Marattiâs hand, intended for execution as an engraving after the altarpiece. Unfortunately, the drawing has been cut just above the Virginâs feet, and we lack the entire composition, which might help confirm this hypothesis.

Your current search criteria is: Objects is "Virgin Surrounded by Angels".