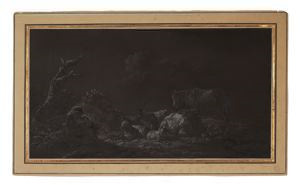 Distinctly reminiscent of Dutch landscapes, Philip James de Loutherbourgâs Pastoral Landscape with a Peasant and His Flock at Night is a picturesque nocturnal scene depicting farm animals clustered near a shepherd dozing by a tree. For this chiaroscuro drawing, de Loutherbourg worked on dark brown prepared paper, using highlights of white chalk to suggest a moonlight landscape and give the animals an almost spectral quality.

De Loutherbourg was an English artist born in Strasbourg and appointed to the French Royal Academy before the age of thirty. He became an immediate success when Diderot compared one of his paintings in the Salon of 1763 to the Dutch landscape painter Nicolaes Berchem.1 De Loutherbourgâs pastoral landscapes are generally dated to the period before his move to England in 1771.2 Once in England, he became an important and influential stage designer, and he was one of the first to adapt the principles of picturesque painting to the conventions of stage performance.3

In his treatment of landscape, de Loutherbourg was known for his break with the classical landscape type developed by Claude Lorrain and Nicholas Poussin, with its conventionalized wing structures and sequencing of planes leading the eye to a distant horizon. As seen here, de Loutherbourg tends to focus on a group of objects or figures in the foreground, where we view a gently receding configuration of rocks and trees that still permits access to the horizon. The mood is one of rustic contemplation and repose, with human beings living in peaceful concert with their animals and nature.4

De Loutherbourgâs success with his idyllic landscapes was not so much a product of his own originality as of his careful study of Dutch precedents like Berchem and Philips Wouwerman, as well as the peasant studies of Isaac van Ostade and Adriaen Brouwer, and Rembrandtâs landscapes with shepherds and old trees.5 Like Dutch landscapists, de Loutherbourg typically creates a bucolic scene where humans and animals are ensconced in the landscape rather than working the land or dominating the composition. The Herman drawing reflects de Loutherbourgâs preference for intimacy of encounter, as well as his liking for moonlit nocturnes in which humanity and the world are united in silvery light and shadow.

Your current search criteria is: Objects is "Pastoral Landscape with a Peasant and His Flock at Night".