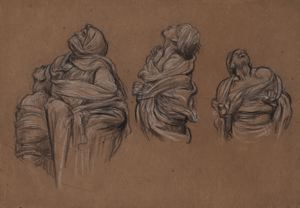 Frederic Leighton was an eminent nineteenth-century British painter, known for his monumental depictions of mythological, biblical and decorative subjects and his systematic use of drawing in preparing his works. This drawing is one of a group of twenty surviving sketches that Leighton executed in preparation for his painting And the Sea Gave up the Dead Which Were in It (1891â1892).1 This painting was originally designed as part of a project of eight large tondi depicting scenes from the Book of Revelations, commissioned in 1877 for the dome spandrels of St. Paulâs Cathedral in London.2 This program was ultimately cancelled in 1885, and in 1891 Henry Tate commissioned Leighton to produce a version of his design, now in the Tate Gallery.

The title of the painting comes from Revelations 20:13: âAnd the sea gave up the dead which were in it; and death and hell delivered up the dead which were in them: and they were judged every man according to their works.â The Herman drawing includes four draped male figures gazing upward, who appear in the background of the finished painting, among figures surrounding the main figure group and representing souls amid the waves rising from the dead.

Leightonâs multiple drapery studies result from a typical step in his complex creative process, deriving from the traditions of Renaissance art.3 After working out the basic composition of a painting, Leighton used drawings like this to explore figural relationships, anatomy, and clothing before combining the elements of the composition in an oil sketch. He would then sketch the nude figures on the final wall or canvas support before adding the clothing, prepared from additional drawn studies.4 The Herman drawing typifies Leightonâs use of chalk, as the tan paper acts as a middle tone between the black chalk that elaborates the strong lines of the figures and the white chalk highlighting the facial features and drapery folds.

Your current search criteria is: Objects is "Figure Study for "And the Sea Gave Up the Dead Which Were in It".