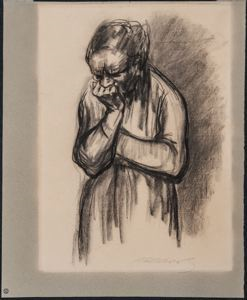 Grief and the âimpulse towards social responsibilityâ1 played central roles in KÃ¤the Kollwitzâs art, which was strongly influenced by events in her own life. Born in 1867 in what is now Kaliningrad, Russia (then KÃ¶nigsberg, East Prussia), Kollwitz was brought up in a family of radical thinkers and socialists. In 1891, Kollwitz married a physician who worked for a workerâs health insurance fund in northeast Berlin.2 Through her husband, Kollwitz was exposed to startling adversity, including illness, death, and the suffering of childrenâall of which appear in her work throughout her career.

Following the death of her son Peter in 1914, early in World War I, Kollwitz slipped into an unproductive period. Sorrowing Woman was produced in the immediate wake of the war, as part of a body of work that signaled Kollwitzâs adoption of a more expressionist style in contrast to her earlier work still under the influence of the German naturalism of the 1880s.3

It has been suggested that Sorrowing Woman may be one of two surviving studies for a figure in The Mothers, a 1919 lithograph.4 Although the physical stance of the figures in these drawings is similar, there is a difference in the use of charcoal. The figure in the other drawing, from the Rosenwald Collection, now at the National Gallery in Washington, is outlined darkly while the interior is composed of lighter, smudged lines.5 Sorrowing Woman is entirely defined by thick, strong lines, and is a more complete rendering of the subject. The emphatic, downward strokes within the figure work with the claustrophobic outlining to denote an intense sense of grief, and is much closer in this use of the medium to Kollwitzâs 1919 studies set in a Leichenschauhaus, or waiting mortuary.6

Waiting mortuaries were a distinctively German institution and dated from the end of the eighteenth century, when a debate raged about real versus apparent death.7 Corpses were left in a waiting mortuary until they began to putrefy, thereby proving their actual death. In Kollwitzâs drawings, the waiting mortuary is a sorrowful place where families come to identify the bodies of the dead, and she uses heavy vertical lines to express emotion in a manner similar to that of Sorrowing Woman. It seems likely that the Herman Collection drawing belongs to this body of images made in a waiting mortuary around 1919, perhaps for a composition on this subject that she never completed.

Your current search criteria is: Objects is "Sorrowing Woman".