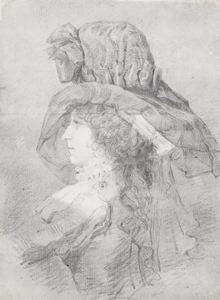 Just two years before their marriage, Jean-Baptiste Isabey exquisitely depicted his future wife with pencil and wash in this drawing. Sunlight bathes her profile, as the precise play of shadows articulates the elaborate details of her hat and dress. The delicately and energetically rendered high ruffled collar, exaggerated sleeves, and towering bonnet add liveliness to her quiet poise, as does the suggestion that we see Mademoiselle de Salienne slightly from behind her left shoulder. Characteristic of Isabeyâs style, medium, and scale, this expressive drawing fits well within the artistâs oeuvre and appears to be a study for his crayon drawing of his wife dated 1789, now in the Albertina.1

Isabey built a successful career on his production of portrait miniatures, paying careful attention to fashion and facial expression. He began his training in the atelier of Jacques-Louis David (1748â1825), yet, much to Davidâs chagrin, Isabey abandoned academic painting to focus solely on the art of miniature painting.2 Following his initial, limited decoration of buttons and snuffboxes,3 Isabeyâs commission from Queen Marie-Antoinette for a snuffbox resulted in his invitation to Versailles and subsequent popularity due to his talent and charismatic personality.4 Remarkably, Isabey continued to serve as premier portrait painter to each ruling party during a politically turbulent period; after Louis XVI and his wife, his patrons included Napoleon, Josephine, Marie-Louise, and the restored Bourbon monarch, Louis XVIII.

In addition to his royal patrons, Isabey depicted his beloved wife repeatedly. Of the five images of her, the dated Albertina drawing of 1789 is nearly identical to the profile pose and costume of Mademoiselle de Salienne in the Herman Collection drawing. The Albertina drawing, however, is notably richer in tone and appears to be one of Isabeyâs early experiments with his innovative drawing Ã  la maniÃ¨re noire, which imitated the visual effects of mezzotint engravings. Due to the rarity and popularity of mezzotint in Paris in the 1790s, Isabey used the newly invented contÃ© crayon to emulate the velvety blacks produced in mezzotints.5 The freshness and delicacy of the Herman Collection drawing suggests that it may well be a highly detailed preparatory study for its almost identical counterpart in Vienna, which exhibits a more developed form and tonality. The Herman Collection image would then be the earliest representation of the artistâs wife, as well as one of his first exercises in developing drawing Ã  la maniÃ¨re noire.