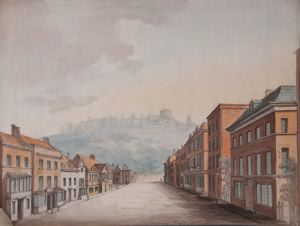 Samuel Irelandâs North View of Windsor Castle as Seen from Thames Street strongly resembles his preparatory drawings for the printed illustrations in one of this prolific writer and draftsmanâs travel books. This watercolor, however, was never finished, and it corresponds to no published illustration. In it, the artist focuses on the pastel facades of the eerily empty buildings and streets of Windsor rather than on the landmark castle, which is obscured in haze on the faraway hill. Irelandâs single-point perspective, as painted from Windsor Bridge, has the lines of his buildings converging into thin, transparent pencil sketches in the distance.

Ireland had earlier made his public debut with his successful volume A Picturesque View through Holland, Brabant and Part of France, published in 1789 and illustrated with aquatints after his watercolor designs.1 He promptly capitalized on this by producing Picturesque Views on the River Thames in 1792, followed by the same title for the rivers Medway, Avon, and Wye, and posthumously, the Severn in 1824.2 Touring the English waterways had become popular among the gentry. Transportation in the country had greatly improved, and the upheavals of the French Revolution made continental travel less appealing.3

The subject of this drawing is closely related to Irelandâs Picturesque Views on the River Thames, published in 1792, but the Whatman watermark dated 1794 precludes its having been made in preparation for that edition.4 While it may have been begun as a preparatory work for the second edition of 1799, Ireland abandoned the drawing despite its relatively advanced state of completion. Missing from it are the small figures in leisurely outdoor activities seen in many of the artistâs finished illustrations for his travel guides. The wide barren street, bathed in warm light, seemingly awaits further strokes of his brush.

Interestingly, Samuel Ireland was deeply implicated in a famous Shakespeare forgery scandal, ostensibly contrived by his son William Henry Ireland. Samuel, however, had a technical knowledge of printing beyond that of his son, and while only William was convicted and Samuel wrote his own widely published vindication concerning his own part in the scheme, his reputation, already questionable, was ruined.5

Your current search criteria is: Objects is "North View of Windsor Castle as Seen from Thames Street".