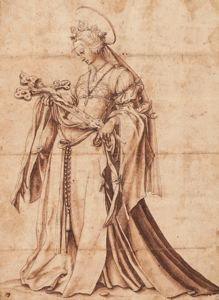 Born around 1497â1498 in Augsburg, Hans Holbein the Younger received his artistic training from his father, the eminent painter of the same name. Following his apprenticeship, he moved to Basel, where he worked as a printer and produced portraits, altarpieces, and building decorations. After nearly a decade of moving around Europe in search of patronage, Holbein settled permanently in London in 1532 and rapidly became the favored court painter.

The Herman drawing depicts St. Kunigunde (ca. 975â1040), wife of the Holy Roman Emperor Heinrich II (972â1024). She is shown wearing a crown and halo contemplating a jeweled cross. Kunigunde and Heinrich were exceedingly pious and devout individuals. At the behest of his wife, Heinrich founded Bamberg Cathedral in 1004, while Kunigunde founded a convent at Kaufungen in 1017. The presence of the jeweled crucifix in the Herman drawing very likely reflects Kunigundeâs gift of relics of the True Cross to the convent as well as to the Cathedral of Basel, the latter of which Heinrich consecrated in 1019.

The St. Kunigunde in the Herman Collection is one of three known drawings of this subject. In addition, Holbein also depicted the saint on the left panel of two organ shutters for the Cathedral of Basel in the late 1520s. None of the three drawings appears to be preparatory for this painting given the numerous differences in composition; however, since the nineteenth century these drawings have been associated with designs for glass window panels of around 1528, since in style and technique they strongly resemble other drawings that Holbein and his workshop produced for such commissions.1

Given the numerous extant versions of this subject, their authorship has been hotly contested. The primary version appears to be the finished and colored drawing in Berlin, which also includes a classicizing frame surrounding the saint. A workshop copy in pen and ink with nearly identical dimensions is in the collection of the Amerbach-Kabinett in Basel.2 The Herman sheet alone excludes the arch in favor of focusing on the meditative figure of St. Kunigunde. This fact, coupled with the possible evidence of workshop handling, has led to the contention that the Herman sheet is Holbeinâs preliminary drawing, with the Berlin drawing being the final version used for presentation to the patron.3 However, its similarity to a workshop drawing, Basel Woman Walking towards the Left of ca. 1523 (Basel, Kunstmuseum), leaves open the possibility that an artist in Holbeinâs workshop executed this drawing. Whether an autograph work or workshop copy, the Herman drawing speaks to the complicated nature of artistic practice in the period and the meticulous standard of draftsmanship in Holbeinâs immediate circle.

Your current search criteria is: Objects is "Study for St. Kunigunde".