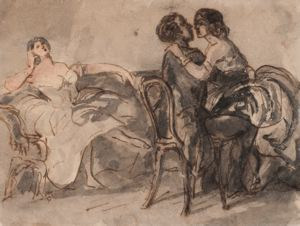 This drawing is set in a nineteenth-century Parisian brothel in which one prostitute perches on the knee of a customer in intimate conversation while a second lounges in the background, looking bored as she awaits a client of her own. This drawing is attributed to Constantin Guys, the artist Charles Baudelaire praised in 1863 as âthe painter of modern life.â Guysâ choice of subject matter and his observation of the Parisian populace impressed Baudelaire, who found in his work âmodernitÃ©,â which he describes as everything âtransient, fugitive, contingent,â and which finds particular expression in female fashion.1

Guys was Baudelaireâs consummate flaneur, the fashionable gentleman who immerses himself in the Parisian crowds day after day, and yet remains apart, an observer of the passing parade of modernitÃ©. At once part of the crowd and detached from it, Baudelaireâs Guys returns to his home at night to record his observations. Baudelaire recounts that Guys drew from memory, not from sketches made from ânature,â emptying his mind of all the stunning images of modern life onto paper.2 Drawings like this apparently support Baudelaireâs account of Guysâ creative energy, relying as it does on a few pen strokes and wash to articulate his subject. Guys was suited to this journalistic endeavor, having begun his career making illustrations of the various wars that marked the French nineteenth century.3

Guysâ drawings are finished works, but he rarely signed them, and due to his reclusive nature, details of his life remain obscure, and dating his drawings is difficult. Guys apparently valued his work so little that he would practically give it away. He wrote to his friend Nadar that, âI have masses of sketches. They have no value. If agreeable to you, Iâd like to send you two or three hundred.â4

The Herman drawing exemplifies Guysâ fascination with women, and particularly his treatment of prostitution. Baudelaire wrote that for Guys, women are âa kind of idol, stupid perhaps, but stunning, enchanting, who hold destinies and wills suspended in their glances.â5 The poetâs fascination with Guys also derives from his own preoccupation with âthe distinctive beauty of evil, the beautiful in the horrible.â6 Guys, however, merely recorded what he saw, rather than commenting on prostitution. The scene feels like a chance encounter, as the main figures have their backs to us and the third pays little attention to anything going on around her. The use of quick brush strokes and rapid application of wash serve to increase this momentary quality of the work, making it seem as though he is drawing from within the room itself, and this may be the aspect of the work that most convinces us of its modernitÃ©.

Your current search criteria is: Objects is "The House of Ill Repute".