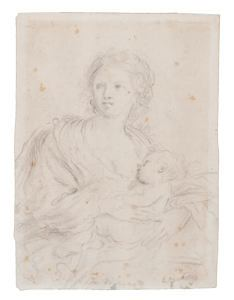 One of the most significant Italian artists of the seventeenth century, Giovanni Francesco Barbieriâbetter known as Il Guercino (the cross-eyed)âproduced a corpus of drawings both prodigious in number and exquisite in style.2 As a result, his drawings have been highly sought after since the seventeenth century. Though the authenticity of this Madonna and Child as an autograph work by Guercino has been questioned, this charming drawing is characteristic of Guercinoâs draftsmanship

The first drawing the Hermanâs bought for their collection, the Madonna and Child was extensively cleaned at one point.3 The stains still visible on the paper suggest that it spent some time in a workshop context. Though no painted version of the composition has been found, Guercino and his shop produced purely imaginative drawings, in addition to numerous studies for his paintings. He also seems to have made a sizable number of drawings simply for his own enjoyment.4

One of the distinguishing characteristics of Guercinoâs draftsmanship is his extraordinarily rapid touch.5 In combination with these distinctively brisk strokes, subtle gradations of light give Guercinoâs works an air of naturalism and movement, an important characteristic of the drawing tradition deriving from the Carracci to which Guercino belonged.6 The Madonna and Child clearly displays these characteristics in the delineation of the garments, where the swirl of lines around the stable core of the weighty female figure are applied in a quick and effortless manner. The smooth flesh of the figures, especially the face of the youthful mother, radiates a soft luminosity. This effect is created through stumping, a blending technique characteristic of Guercinoâs oeuvre.

The sweetness and charm of this Madonna and Child are another of Guercinoâs hallmarks.7 While the sympathetic portrayal of people was a constant feature of his work, Guercino tended to rely heavily on certain media at various points during his long artistic output, and his use of sharpened black chalk predominates in the late 1630s and 1640s.8

Miles Chappell has suggested that this drawing is not by Guercino himself, but by a later follower.9 If in fact a work by a later hand, this drawing can at least be seen as a testament to Guercinoâs continuing influence on draftsman after his death in 1666.

Your current search criteria is: Objects is "Madonna and Child".