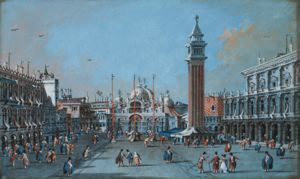 Venice is known as the birthplace of the veduta, or view painting, a subject that peaked in popularity during the mid-eighteenth century, when cityscapes functioned as souvenirs of the Grand Tour.1 Wealthy Northern Europeans traveling through France and Italy desired beautiful, idealized reminders of their adventures and became patrons of the large, elaborate vedute made by famous vedutisti, including Canaletto (Giovanni Antonio Canal, 1697â1768). In contrast to Canalettoâs detailed vedute commissioned for grand residences, Giacomo Guardi produced much smaller and more painterly views. Although Giacomoâs pictures functioned like our postcards, the artist favored the presentation of mood over photographic accuracy. His lively pictures, including View of the Piazza San Marco, were widely collected around the turn of the nineteenth century, and were particularly appreciated for their scale and playfulness.

Giacomo Guardi was the youngest artist of a multi-generational Venetian workshop, and he dedicated his career to the production of small-scale vedute. Giacomo inherited the familyâs studio from his father Francesco Guardi (1712â1793), the last of the great eighteenth-century vedutisti. Greatly influenced by Francescoâs atmospheric style, Giacomo created hundreds of vedute in gouache and in pen and ink. Due to their intimate size, they are often called âvedutineâ (mini vedute).2 Most depict famous Venetian piazze or monuments favored by tourists, including St. Markâs Square, the Ducal Palace, and the Rialto Bridge. To promote his business, Giacomo typically inscribed the verso of his vedutineââas he did with this drawingââwith its title, his studio address, and his signature. This aided his patronsâ return to purchase additional vedutine.

View of the Piazza San Marco exemplifies Giacomo Guardiâs oeuvre while illustrating the transformation of the veduta. In this vedutine looking towards St. Markâs Basilica, Giacomo uses gouache to animate a scene of figures engaged in various activities. The muted blue, brown, and orange tones create the painterly scene, while black delineates the architectural and figural details. Instead of individualized figures, the artist suggests faces with dots, adding to the lighthearted air of the view. One detail of the menâs costuming indicates that Giacomo most likely produced this vedutine during the early nineteenth century: the gentlemen wear top hats, the newest trend in menâs headgear just after the turn of the century.3 Arriving at the end of the long trajectory of Venetian souvenir views, the subject matter of this vedutine epitomizes the cityscape tradition while its scale and style show the development of the genre from grand, luxurious, topographically accurate paintings to small, painterly souvenirs.