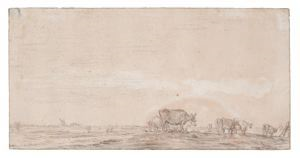 The Leiden-born artist Jan van Goyen is esteemed today as one of the major creative figures in Dutch painting. An early practitioner of the so-called âtonalâ style of Dutch landscape painting, van Goyen produced more than twelve hundred extant paintings and in excess of a thousand drawings, making him one of the most prolific artists in the period. The present drawing exemplifies van Goyenâs early activity as a draftsman, employing his preferred medium of black chalk on paper. To this, van Goyen has deftly added grey wash so as to better capture light effects in the sky, which dominates more than four-fifths of the composition.

The distinctively low horizon line with much of the picture given over to the sky is characteristic of tonal-style imagery. Similar compositions can be found in the contemporary still life paintings of artists like Pieter Claesz., whose tables bedecked with all manner of items are seen from an equally low vantage point. The reasons for such a compositional choice in landscapes are not entirely clear. It may well have been intended to express a spiritual connection between the artist and the landscape, the sky becoming a metaphor for heaven.1 One might also suppose that artists like van Goyen simply intended to capture the awe-inspiring sky above Hollandâs strikingly flat landscape, something evident to any traveler today.

Below the sky, van Goyen encourages his viewer to slowly take in his landscape through a series of rapid horizontal markings, which, when taken together, create subtle changes in the terrain. The eye is first drawn to the numerous cows that populate the right side of the composition. Only afterward does one begin to notice the sketchily executed windmill and grazing cows that van Goyen has artfully tucked into the left background of his composition.

The prominent inclusion of cows probably induced an early attribution of this drawing to Aelbert Cuyp, whose landscapes with cows are among the most beloved products of the period. Only relatively recently has the drawing accurately been given to van Goyen by Hans-Ulrich Beck, who proposed a date in the 1630s.2 Given the drawingâs size and manner of execution, it was almost surely executed naer ât leven (literally âfrom lifeâ) and comes from one of van Goyenâs many sketchbooks kept during his travels through the Dutch countryside.

Your current search criteria is: Objects is "Landscape with Cows".