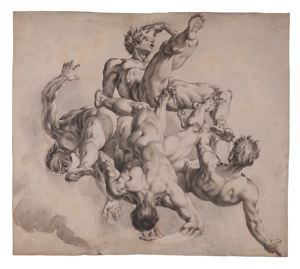 This drawing was clearly made as an homage to Hendrick Goltzius, one of the greatest artists of the early Dutch Golden Age. It was also perhaps a response to the challenging virtuosity of his work, for this drawing combines in a single image figures from a set of four engravings that Goltzius made in 1588, based on designs by Cornelis Cornelisz. van Haarlem.1 Goltzius enhanced Cornelisâ paintings by engraving each contorted nude male body, shown plummeting through the air, within a circular field, which highlights their flung-out limbs and the skillful foreshortening of their bodies viewed from unusual angles.2

Our unknown artist aimed to do Goltzius one better by composing these figures within a single coherent composition. Combining the four figures with their lower bodies and legs towards a central fulcrum and with one of each manâs arms at the edges suggesting a pinwheel design, the drawing displays the artistâs skill in composition and mastery of perspective, transforming his models.3 Our artist also succeeded in rendering the exaggerated musculature of Goltziusâ figures, but instead of using Goltziusâ structure of cross-hatched swelling and tapering lines with their characteristic optical rippling effect, this artist for the most part used a regular hatching of parallel pen lines to model form, which is arguably even more difficult than Goltziusâ technique. Our artistâs display of mastery of foreshortening, composition, and pen modeling is thoroughly in the spirit of Goltzius and the other Dutch Late Mannerists, for whom the accomplishment of the difficult, the complex, and the witty with seeming ease was one of their highest aspirations.4 Each viewer can decide the degree to which this artist succeeded in matching or even exceeding the virtuosity of Goltzius himself.

Your current search criteria is: Objects is "The Four Disgracers: Icarus, Phaeton, Tantalus, and Ixion".