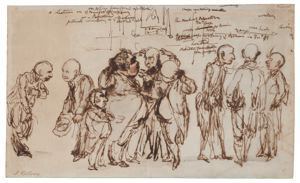 In this drawing, the brilliant English caricaturist James Gillray satirizes nine prominent members of the British Whig Party, who are depicted wiglessââcroppedâ in the parlance of the timeâas they discuss a new tax on wig powder imposed by the Tory Prime Minister, William Pitt, in 1795.2 Those still willing to partake in the fashion had to pay an annual license of a guineaâleading to the term âguinea-pigsâ for such individuals. The tax was the subject of much controversy as it raised numerous issues of social equity and support for the war with France, which was not going well and which the tax in effect supported. Not wearing powdered hair became a statement on the part of many Whig politicians and sympathizers.

The targets of Gillrayâs satire include prominent anti-Pitt politicians, among them Richard Brinsley Sheridan on the far left, the famous playwright and politician and supporter of Charles James Fox.3 Conversing with Sheridan is the twelfth Duke of Norfolk, Bernard Edward Howard. The short figure on the right of Howard is Michael Angelo Taylor, a supporter of both Fox and the Whig party. The robust figure to his right is the notorious Whig Charles James Fox, whose outsize physical appearance is immediately recognizable from numerous caricatures. The figure to the right with both arms raised is the third Duke of Grafton, Augustus Henry FitzRoy, who served as the Whig Prime Minister. The figure scratching his wigless head is the twelfth Earl of Derby Edward Smith-Stanley, a prominent Whig. The last three figures are the Early of Stanhope, an unknown individual with his back to the viewer, and the Earl of Lauderdale.

Douglas Fordham has observed that Gillrayâs satire very like echoes George Stevensâ Celebrated Lecture on Heads, which he performed in London in 1764.4 Stevens placed different wigs on âblocks,â which were used to make, display, and store wigs. Fordham also notes that in addition to the humor of seeing the Whigs bald, Gillray presents the Whigs as displaying an empty-headed patriotism. By slavishly going around bald, Whig politicians are turned into wooden blockheads. Only Fox, who never wore a wig, is shown with his hair.5

The frantic, often heavily reinforced pen lines are typical of Gillrayâs preparatory drawings; and the dark blots result from the use of very acidic iron-gall ink. The multiple texts at the top of the drawing reveal Gillray working out a title, with a number of ideas being edited or amplified, and some being interpolated below the prior versions, making the texts difficult to decipher. The drawing is clearly preparatory for one of Gillrayâs characteristic prints, but no published version is known. His one published satire commenting on the tax is an entirely different composition.6

1Draper Hill in a letter to Frederick Herman, 29 October 1969 (Museum curatorial files), observed that the signature is real but unusual and suggests that the drawing may have been among those given to Rev. John Sneyd, who worked with Gillray on ideas for prints.
2John Barrell, The Spirit of Despotism: Invasions of Privacy in the 1790s, Oxford, 2006, 146â209.
3Draper Hill identified the figures in his letter to Frederick Herman (Museum curatorial files).
4George Alexander Stevens, Celebrated Lecture on Heads, London, 1765. Fordham also suggested that there may be a distant echo of William Hogarthâs satirical etching Five Orders of Periwigs (1761): see Ronald Paulson, Hogarth, New Brunswick, NJ, 1993, Vol. 3, 349â351.
5Personal communication from Douglas Fordham to the editor.
6Barrell, Spirit of Despotism, 169â170, Pl. 4.5.

Your current search criteria is: Objects is "A Lecture on the Beauties of Cropping, OrâWhigs Transformed into Blocks".