Caricature of a Lady with a Fan 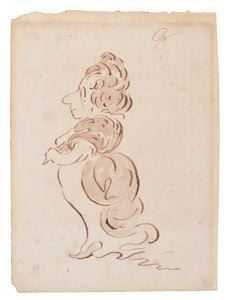 Caricature of a Lady with a Fan

Pier Leone Ghezzi was born to Giuseppe Ghezzi, secretary to the Accademia di San Luca, an association of artists in Rome. Ghezzi, too, joined the Academy in 1705, and for the rest of his career he painted respectable religious and historical subjects for churches and public buildings. However, he is better known for caricatures like this Lady with a Fan. The word âcaricatureâ derives from the Italian verb caricare, meaning to load or exaggerate. Caricature has its modern origins in the workshops of seventeenth century Italy. Artists as early as Leonardo da Vinci distorted normal facial and bodily proportions for their own amusement, but the Caracci brothers, Annibale and Agostino, are credited with both the term caricatura and with establishing caricature as a tradition among artists. Although no caricatures by Annibale survive, he is said to have coined the term ritrattini carichi (exaggerated portrait), which evolved into our word, caricature.1 The Caracci played with caricature because of its power to purify visual data into cues with moral and social resonance, but they did not attempt to support themselves by it. Rather, the funny, peculiar doodles passed from master to pupil and studio to studio, from the Caracci to Bernini to the Tiepolo to Ghezzi.2

Ghezzi, a significant collector and antiquarian, was a great student of this tradition, but his own success in caricature corresponds with the rise both of print culture and of the middle class. Publishing, coupled with throbbing status anxiety, created a hunger for quick, satisfying satire. Indeed, the genre was so successful, that the shame of being mocked dropped away in the face of the honor of being notorious. Ghezzi, in particular, caught on with the Roman bourgeoisie because his spoofs were slightly gentler, as we can see in Lady with a Fan, which is more silly than scandalous.3

This drawing probably dates just before the 1720s, when Ghezzi was only on the cusp of his later success. Several features place it at this stage. The womanâs features are generic, and the drawing lacks an identifying text on its verso. When Ghezzi became more famous, patrons commissioned portraits with flattering jokes about themselves on the back,4 but Ghezzi does not portray a particular individual in this work. âLadyâ also relies on wash to distinguish its subjectâs hair and dress from her body, and remains relatively flat. Later in his career, when Ghezzi transitioned to engraving to increase circulation of his work, his drawing style became strictly linear.5 He exchanged wash for hatching, and increased focus on depth and shadow. Nonetheless, âLady with a Fanâ clearly displays the sly, brisk wit that made Ghezzi famous.

Your current search criteria is: Objects is "Caricature of a Lady with a Fan".