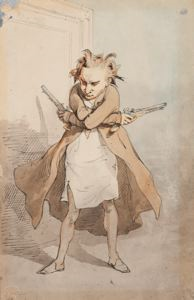 Paul Gavarni, nÃ© Hippolyte Chevalier, rose to fame for his caricatures of French society, published in periodicals like Le Charivari, Le Caricature, and LâIllustration. His pictures brought him commissions to illustrate serials and novels, including the works of Balzac. In the mid-1830s, however, his wit attracted the wrath of King Louis-Philippeâs censors.1 In order to keep drawing, Gavarni was forced to turn his eye toward private life. A Jealous Suspicion2 dates from this second phase of Gavarniâs career, in the course of which Gavarni kept his political bite by satirizing the bourgeois domesticity fostered by Louis-Philippe.3 In his series Fourberies de Femmes (Subterfuges of Women, 1837-1841) and the related, Les Maris vengÃ©s (Husbands Avenged, 1837â1838) Gavarni portrayed women as dissemblers who constantly threaten their intendedsâ and husbandsâ well-being.4 These lithographs abound with disheveled and defeated figures like the one portrayed in A Jealous Suspicion. Gavariniâs series became the foremost depiction of bourgeois sexuality.

The subject of this drawing does not wear a ring but, given his state of undress, we imagine that he is a husband in his own home. He holds a gun, but his tangled arms and emasculating nightshirt show that his wife or mistress wears the pants. His hair rises into cuckoldâs horns, his twisted arms signal indecision, and his shadow on the door hints visually that the object of his anxieties rests inside. For all its energy and subtle combination of satirical humor and sympathy, A Jealous Suspicion is a mild example of the loathing for vice which increasingly embittered Gavarniâs life and work as he grew older.5

Highly finished, A Jealous Suspicion is clearly no sketch, but it lacks a signature, opening the possibility that it is an example of the numerous imitations and forgeries of Gavarniâs work.6 The drawingâs polish, its subtlety, the quality of paper, and the detailânotice the foreshortening from below of the gun at right, for exampleâall argue that this drawing is not the exercise of a talented imitator.

Your current search criteria is: Objects is "A Jealous Suspicion (Un SoupÃ§on Jaloux)".