A Group of Bedouins 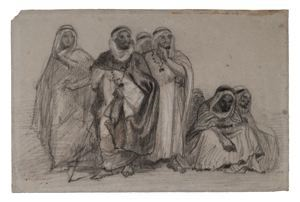 A Group of Bedouins

The French painter, EugÃ¨ne Fromentin, is best known today for his book, Les MaÃ®tres d'autrefois (The Masters of Past Time, 1876), a commentary on Rubens, Rembrandt, and other Dutch and Flemish masters, which significantly influenced the development of art criticism through its eloquent prose and discussion of technique.1 Fromentinâs pictorial style descended from the romanticism of Delacroix, and in both his literary works and his artistic oeuvre he straddled the line between the real and idealized.2 Under the tutelage of the academic painter Louis Cabat, Fromentin was encouraged to represent the world, and although this influence translated into his use of observational sketching, Fromentin continued to imbue his paintings with the academic standard of idealized beauty.3

Fromentinâs artistic direction was fundamentally transformed in 1846 when chance circumstances brought him to Algiers. Fromentin grew enamoured with the âOrient,â both its landscape and its people, whose dignity he admired and whose exoticism was popular with viewers. Fromentin made two subsequent, more extensive journeys to North Africa, which he documented with numerous drawings and journal entries. These served as source material for some of his greatest paintings and two of his books, Une AnnÃ©e dans le Sahel (A Year in the Sahel, 1859) and Un ÃtÃ© dans le Sahara (A Summer in the Sahara, 1857). Although Fromentinâs sketches were the result of careful study during his travels, they are not ethnographic records of North Africaâs native tribes, but instead present types, ennobled Arab ideals.4 Individualizing features are absent in the Herman drawing, and the figures sport similar garments and facial hair. Nor did Fromentin explore in painting or prose North Africaâs political atmosphere, which was unstable as natives continued to rebel against French colonial rule. Though aware of the deficiencies of colonial rule, he favored instead a more general, romanticized depiction of the region.5

A Group of Bedouins is not a finished work but a preliminary sketch which remained in Fromentinâs studio until the sale of his estate in 1877 and was most likely executed in preparation for another work. During the course of execution Fromentin made adjustments to the drawingâs composition, broadening it with the addition of the figure on the far left. Although the same sale consisted of a number of life drawings from Fromentinâs second stay in Africa (1847), A Group of Bedouins was probably drawn in the studio rather than from life as an attempt to work out the composition of the figure group before its insertion into another scene.6 As a studio drawing, A Group of Bedouins reveals the intermediate stage of Fromentinâs process of transforming his observational sketches into Salon-worthy paintings of the exotic and romantic Orient.

Your current search criteria is: Objects is "A Group of Bedouins".