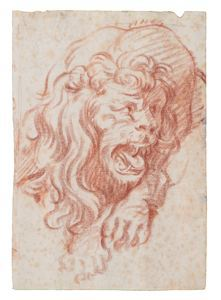 Embodying the freedom and curiosity of the French Enlightenment, Fragonard developed an exuberant and fluid manner as a painter, draftsman, and printmaker. He was a prolific artist producing more than 550 paintings, a drawing catalogue numbering over 2,000 images, and at least thirty-five etchings.1

With a passion for both red and black chalk, Fragonard created a vocabulary that was at once descriptive and expressive. Despite the small scale of this work, the treatment of line and form is fluent and rapid. Broad diagonal hatchings create shadows, while the lines in the lionâs mane swell and taper in an almost ornamental manner.

It is surprising to find that with Fragonard the traditional role of red chalk in the preparatory process for a work of art was in some cases reversed: an oil sketch may precede a painting, and the drawing may actually follow the painting.2 Fragonard and his patrons also regarded sketches as autonomous works, worthy of proper mounts and collectorsâ marks. Fragonard, like David and Ingres after him, exhibited his drawings, affirming his desire to become known and appreciated for his draftsmanship as well as for his paintings. However, unlike David and Ingres, Fragonard marketed his drawings, which accounted for a good portion of his income as an artist.3

Best known now for billowy rococo landscapes and gallante subjects, Fragonardâs drawn oeuvre, however, is diverse, including drawings of genre scenes, portraits, animals, mythology, and allegories. He made a number of black chalk and red chalk drawings of lions and house cats that resemble the Herman drawing to varying degrees.4 A black chalk drawing in the Louvre depicting eleven heads responding to a roaring lion is particularly close to this drawing.5 Miles Chappell has also pointed out the resemblance of this drawing to chalk drawings Fragonard made after Italian and Flemish works of art, though a specific source for this vividly characterized Crouching Lion, with its almost anthropomorphic face, has not yet been identified.6

Your current search criteria is: Objects is "Crouching Lion".