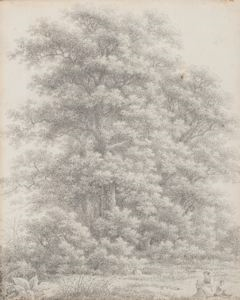 Thomas Ender was among the most important figures in Austrian art in the first half of the nineteenth century. A prolific draughtsman and watercolorist, Ender began his artistic training at the Vienna Academy in 1806 and flourished in the depiction of landscapes from 1810 on. It was around this time that he broke from the academic landscapes promoted during his training in favor of those taken directly from nature by his contemporaries Franz Steinfeld (1787â1868) and Josef MÃ¶ssmer 1780â1845). Ender won the grand prize from the Academy in 1816, traveled to Brazil in the following year at the behest of Prince Metternich to record the local landscape, and served as corrector and professor at the Academy from 1836 until 1849. He is particularly known for his topographically accurate Alpine views in watercolor and etching.1

The present drawing is almost assuredly an early work by the artist, still showing the vestiges of his classical training in the inclusion of the staffage in the right foreground. However, the focus on a single clump of trees, presumably taken directly from nature, reflects his new sensibilities. This drawing distinctly resembles a landscape painting of about 1810 in a private collection.2 It also shares compositional features and an almost compulsive rendering of leaves with a number of Enderâs etchings from 1813â1817. It is particularly close to his Figures in the Prater, which shows a similar group of figures relaxing below a clump of trees in the Viennese park.3

While Ender typically finished his pencil drawings with watercolor, works executed solely in pencil are not entirely unknown, especially early in his career. A number of drawings from Enderâs time in Brazil were executed in pencil without the addition of color.4 Given the drawingâs close stylistic relationship with a number of Enderâs etchings, it is equally possible that the present work was conceived in preparation for a print that never came to fruition.

During the Biedermeier Period (1815â1848), Austrians particularly prized landscape views of a natural world rendered objectively but characterized as more majestic than human beings.5 This drawing belongs to that body of work with its enormous towering tree, lovingly rendered to the minutest leaf, while the figures are anonymous and minuscule, competing with the over-sized vegetation in the foreground.

Your current search criteria is: Objects is "Study of Trees with Three Figures in a Landscape".