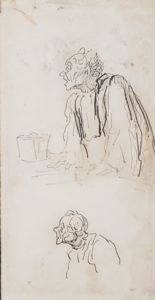 Among the greatest satirists of the nineteenth-century, HonorÃ© Daumier was famous for carrying a sketchbook with him in order to capture numerous aspects of modern life in Paris, including the treatment of ordinary people at the hands of the government.1 The Herman Collection drawing The Lawyer and the Defendant belongs to an extensive body of images in his work depicting lawyers and courtroom scenes, ranging from rapid sketches like this drawing, to published lithographs, to finished paintings. Here, a lawyer, identifiable by his robe and the hat beside him, apparently stands over his client, his hands pressed onto the table in the act of passionate oratory. The defendant, a quiet, innocent-looking old man, smiles gently.

Daumier often took sketchbooks to the Palace of Justice in Paris, and numerous sketches of lawyers in the act of arguing a case survive, including close studies of faces like those in the Herman drawing. While Daumier also drew from memory and had a stock of character types,2 the thin, cheap paper used for this drawing, seemingly torn from a notebook, suggests that it may well be a sketch Daumier made on the spot. K. E. Maison has questioned the authenticity of the thick, dark vertical lines in the Herman drawing, suggesting that they were drawn by another hand over an autograph sketch by Daumier.3 Agnes Mongan disagreed with Maisonâs assessment; and, indeed, such bold, reinforcing lines can be found in many other accepted Daumier drawings and seem to be of a piece with the rapidly drawn character of this and other sheets in his oeuvre.4

While this drawing has been linked to Daumierâs painting The Pardon (MusÃ©e dâOrsay, Paris, 1865â1867), the connection is tenuous.5 It is much closer to a group of sketches and more finished watercolors of the 1860s depicting lawyers pleading cases, leaning forward with a hat beside them on the bar. In a number of these works the lawyerâs face strikingly resembles that in the Herman drawing.6

Daumier characteristically depicted lawyers behaving theatrically as here because he considered them as a type of actor, as well as coldly arrogant and self-serving.7 He knew lawyers well, having worked as a messenger boy in the Palace of Justice, and in 1831 he was jailed for producing a lithograph satirizing King Louis-Philippe. He also experienced financial woes that put him in contact with creditors and other legal professionals on a regular basis, and that may well account for the pointed intensity with which he depicted them.8

Your current search criteria is: Objects is "The Lawyer and the Defendant".