A Swarm of English Bees 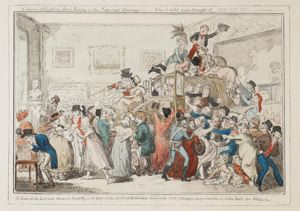 A Swarm of English Bees

George Cruikshank
British, 1792 - 1878
A Swarm of English Bees, 1860s
Watercolor, 13 9Â½16 x 18 1Â½4 in (34.45 x 46.36 cm) (sheet)
Signature: âG. Cruikshank fect [fecit]â
Inscriptions: At top: âA Swarm of English Bees hiving in the Imperial Carriage!! â Who would have thought it !!! !!! !!!â At bottom: âA Scene at the London Museum, Piccadilly â or a peep at the spoils of Ambition, taken at the Battle of Waterloo being a new tax on John Bull for 1816 &c &câ Balloon texts left to right: âThis box contains upwards of 100 articles of solid gold &â âLook at the horses Tommyâ âOh! Mon dear Empreur dis is de shocking sightsâ âThis is one of Napoleonâs shirts Ladiesâ âYouâr prime bang up!!â âLook at Zaber gashesâ âBox for the Ironâ âOh! My Frillâ
Watermark: J Whatman
Gift of The Frederick and Lucy S. Herman Foundation, 2007.15.27

In A Swarm of English Bees, British caricaturist George Cruikshank lampoons early nineteenth-century British society, which was sometimes identified with a beehive, while punning on Napoleon Bonaparteâs personal emblem of the bee. The bumbling crowd seems to âhiveâ agitatedly around the object of fascination â Napoleonâs carriage, exhibited in 1816 in the London Museum, also known as Egyptian Hall, at Piccadilly. Collector and explorer William Bullock purchased the carriage in order to create âThe Spoils of Warâ exhibition of objects from the French defeat at Waterloo. The show was a huge financial success for Bullock.1 For Cruikshank, it presented a potent narrative, ripe for satire. Following the comic tradition of Hogarth, Cruikshank leaves no doubt that polite English decorum has broken down into an unruly popular spectacle.

Cruikshankâs marginal inscriptions and balloon texts suggest the immediacy of speech, with his emphatic phrases and exclamation marks. Two of the quotations are especially amusing and telling: âOh mon dear Empreur, dis is de shocking sightsâ from the man with a handkerchief who looks at the bust of Napoleon; and âOh! My Frillâ from the man being trampled by the riotous crowd in the foreground. The laughing figure on the lower right is very likely a self-portrait of the artist, amused by the absurdity of the spectacle.2 Cruikshankâs phrase âa peep at the spoils of Ambitionâ alludes to Napoleonâs downfall, but also refers to social climbing of the overly ambitious, those who will step on each other to get up the social ladder.

Cruikshank was primarily an engraver and illustrator, and, at first glance, this work appears to be a colored etching. It is, however, a meticulously executed watercolor. It is not a preparatory work for a print, since none of the artistâs other preparatory sketches are finished to this degree, and none were fully colored.3 Indeed, this watercolor is an exact copy of one of Cruikshankâs own etchings published in two editions in 1816 and 1835.4 This type of drawn reproduction of his own etchings is characteristic of his late work, resulting from his financial difficulties owing to the British banking crisis of 1857.5

In deftly and humorously capturing the unruly and socially varied crowd, and their abandonment of propriety, Cruikshank shrewdly characterizes the nature of English society.

Bates, William. George Cruikshank: the Artist ,the Humorist, and the Man, with some account of his brother, Robert. London: Houlston and Sons, 1879.

Chappell, Miles, ed. âGeorge Cruikshank.â Form, Function, and Finesse: Drawings from the Frederick and Lucy S. Herman Foundation, catalogue of the exhibition and handlist of the collection. Williamsburg, Virginia: Joseph and Margaret Muscarelle Museum of Art, College of William & Mary, 1983.

Cohn, Albert M. George Cruikshank: A Catalogue RaisonnÃ©. No. 1959. London: The Office of The Bookmanâs Journal, 1924.

Mays, Ronald. âThe Romance of London Theatres.â Program for the Lewisham Hippodrome, no. 3, 1930.

Your current search criteria is: Objects is "A Swarm of English Bees".